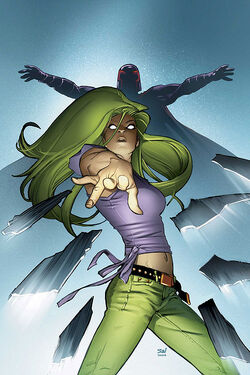 Polaris dated Alex Summers for a while, and may have dated his brother Scott Summers in the past. The United States Government convinced Alex to leave her because they wanted him to join a government sponsored group known as the New Mutants, and they wanted to disassociate themselves from "magnet people" after the chaos caused by Magneto.

After Emma Frost re-located to Chicago with Alex Summers in town, Lorna apparently joined Frost's school there, and hooked up again with Alex. The couple were two of the senior members of Frost's action squads, who tried to use their powers to help out local authorities when the situation warranted their involvement. Unfortunately, on one such case Lorna's powers flared out of control, and she blasted metal all over killing six firefighters. Unable to stop herself, she begged Alex to stop her which he did with a plasma blast. Lorna was taken into custody by S.H.I.E.L.D., who planned to put her inside their plastic prison with Magneto. She was framed by Mystique and Magneto in order for her to convince Havok into getting her out of the plastic prison and in the process Magneto switched places with Mystique. In the end, Polaris' name was cleared and she returned to the Academy of Tomorrow.

Lorna and the majority of the Academy of Tomorrow were killed during an attack caused by Magneto.

Magnetokinesis: Polaris was mutant with the superhuman power to channel and manipulate magnetic fields that exist naturally or artificially. She could also absorb electricity to supercharge her own electromagnetic fields
. Using her powers, she could display the following:

Like this? Let us know!
Retrieved from "https://marvel.fandom.com/wiki/Lorna_Dane_(Earth-1610)?oldid=6401880"
Community content is available under CC-BY-SA unless otherwise noted.