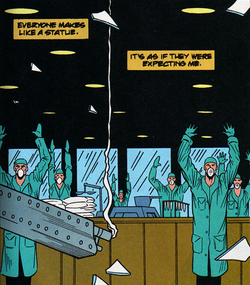 Los Blancos were a Latino drug gang which were one of the biggest players in the underworld in the mid 1990s, rivals of the Kingpin for dominance in New York City. They ran an empire of crack cocaine and crystal methamphetamine, with the flagship of their drug production network being in an old amusement pier on Coney Island. Members all wore blue bandanas which covered their hair and many wore trenchcoats.[1]

The Punisher went after Los Blancos after he had accidentally slaughtered a family of tourists during a running gun battle.[2] Seeking death he accepted intelligence provided by the Kingpin on his strongest rivals in the underworld, who wanted to use him as a weapon against them to regain his former position as New York City's premier crimelord.[3] The Punisher launched on assault on the pier, slaughtering members of Los Blancos, and destroying the lab during his confrontation with third parties (e.g. Bullseye).[1]

Retrieved from "https://marvel.fandom.com/wiki/Los_Blancos_(Earth-616)?oldid=5548514"
Community content is available under CC-BY-SA unless otherwise noted.