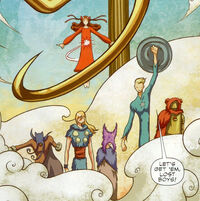 Lost Boys were residents of Neverland who lived there for an unknown amount of time who never aged. Wanda and Pietro were brought to Neverland by the Captain and met up with the Lost Boys when Captain Klaw used his new weapon on the trio separating them. Wanda began to plummet to the ground near them and Hawk fired an arrow at her. The Captain attempted to intervene but ultimately she saved herself with magic. After a brief introduction the group went to find Pietro, who had landed close by. Klaw however had found him first and when the group arrived to his last known location, Klaw captured them. Hawk and the rest woke up to find themselves on Klaw's pirate ship and Wanda used her magic to free the Lost Boys and a short battle ensued. Klaw escaped but was chased down by Wanda and the Captain, after trying to subdue him, the crocodile who ate Klaw's hand arrived for the rest of him. Wanda, Pietro and the Lost Boys escaped the sinking ship, leaving the Captain behind to try and rescue his shadow.[1]

Retrieved from "https://marvel.fandom.com/wiki/Lost_Boys_(Earth-TRN556)?oldid=4842309"
Community content is available under CC-BY-SA unless otherwise noted.