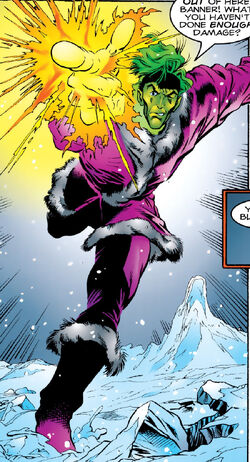 Louis Lembert was given his powers by the Leader and served him at the Freehold as a member of the Riot Squad.[1] When his girlfriend, Jailbait, died, he started losing his mind. He went to a Catholic Church during Sunday services and held the congregation hostage in order to force the priest to perform last rites on Jailbait, all while ranting that Jailbait was possessed by the devil and that he saw a Green Door,[2] when she had been taken over by the One Below All.[3] He was eventually confronted by the Hulk who broke both of his hands and knocked him out. The police then arrested Lembert. Still grieving over the loss of Jailbait, Lambert committed suicide while in prison by hanging himself.[2]

Energy Projection: Lambert is able to project energy bolts from his hands. These bolts are powerful enough to blow a hole right through the Hulk.[2]

Like this? Let us know!
Retrieved from "https://marvel.fandom.com/wiki/Louis_Lembert_(Earth-616)?oldid=5609975"
Community content is available under CC-BY-SA unless otherwise noted.