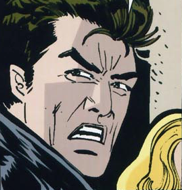 After being his lieutenant for some time, Lou Rocko was eventually left for dead in Central Park by the Kingpin.[1]
Rocko was rescued by Portia, a wealthy amateur photographer who found him in the park and sheltered him from his enemies.[2]
Rocko agreed to help her with a book project about the New York juvenile street gangs.[3]
He later proposed Portia to eliminate both her former husband and Don Sanguino.[4]
Rocko was then persuaded by Portia and Don Sanguino to eliminate the Kingpin.[5]
He was caught and knocked out by Senator Bianco in the basement of St. Mary's Church.[6]
Lou Rocko was eventually killed by the Kingpin inside the church.[7]

Like this? Let us know!
Retrieved from "https://marvel.fandom.com/wiki/Louis_Rocko_(Earth-616)?oldid=5533734"
Community content is available under CC-BY-SA unless otherwise noted.