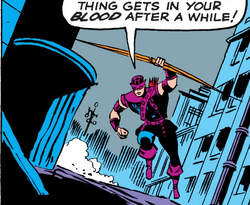 The Lower East Side is a neighborhood located in the Manhattan borough of New York City.

S.H.I.E.L.D. agents Richard and Mary Parker used to live in a Lower East Side apartment with their son Peter.[1]

Desiring to find the Black Widow, Hawkeye came here only to walk into a trap set by the Mad Thinker, being attacked and captured by Hammerhead.[2]

He then returned, entering a cheap, sleazy bar where he found Bruiser, whom he clashed with and interrogated to know where the commies were keeping the Black Widow.[3]

After having been reconstructed by the Vision, Ultron returned to his old base in the Lower East Side to plot the total destruction of mankind. Seeking to make up for betraying the Avengers, the Vision followed Ultron back to his base and learned the robot's plot to destroy New York City in a giant nuclear explosion. Soon, the Vision was joined by the Avengers, who took the sidelines while the Vision battled his creator. However the battle was lost because of the untimely intervention of S.H.I.E.L.D. agents, who were tracking the Adamantium which Ultron's body is constructed of. As they arrived and stunned the Vision, Ultron was allowed to escape, leaving the Avengers to deal with the device set to destroy the whole city.[4]

The Vision eventually informed the Avengers that that he destroyed the device's mechanisms, preventing Ultron from detonating the explosion.[5]

Using telemetry data supplied by Charles Xavier, Spider-Man and the Fantastic Four traced the person who took over Spider-Man's mind to a church where Father Bowen was sheltering Xi'an Coy Manh. After she told them she possessed Spider-Man to rescue her two little brothers Leong and Nga, who were kidnapped by uncle Nguyen, the Fantastic Four and Spider-Man immediately agreed to help.[6]

Searching for a thief named Alarich Wallenquist, Daredevil tried to get information from Turk Barrett and Bilge, only to be attacked by Elektra, who was out to collect the bounty on Wallenquit's head. Elektra cured the unconscious Daredevil and had Bilge called his boss Eric Slaughter, who managed to speak in code to make Slaughter understand that he'd been captured by the assassin.[7]

A few days later, the rumor of the Kingpin's return in New York City began to spread quickly in the Lower East Side.[8]

A few days later, Kirigi woke up after being struck down by Elektra.[9]

Some days later, Foggy Nelson began stalking the Lower East Side to investigate Glenn Industries' dealing with an explosive manufacturer.[10]

Some times later, Frank Cortese was hired by Mister C to protect him from Spider-Man.[11]

As soon as he had another vision of Mary Jane Watson being killed, Kaine escaped from a maximum-security holding penitentiary in the Lower East Side.[13]

Ben Reilly used to live in a modest Lower East Side apartment.[14]

Threnody visited an abandoned building in the Lower East Side to feed upon the dying drug addicts.[15]

The Kangaroo used to lurk in a hidden burrow on Manhattan'sLower East Side.[16]

The Cat came to the Lower East Side to know where his kidnapped son was being kept.[17]

In a Lower East Side hotel, Alison Mongrain was rescued by Joe Robertson from an assassination attempt.[18]

Boomerang's hideout was in an abandoned warehouse on the Lower East Side of Manhattan.[19]

Ben Grimm's old school was located in the Lower East Side.[20]

When Black Bolt confronted Thanos in hopes of preventing the Mad Titan's invasion of Earth in the search of his son, he unleashed a powerful attack that triggered a Terrigen Bomb and destroyed Attilan in the process.[21] The resultant Terrigen Cloud released in New York City began to circumvent the globe, repeatedly striking the Lower East Side and transforming Humans of Inhuman descent including Moon Girl.[22]

Like this? Let us know!
Retrieved from "https://marvel.fandom.com/wiki/Lower_East_Side?oldid=6031053"
Community content is available under CC-BY-SA unless otherwise noted.