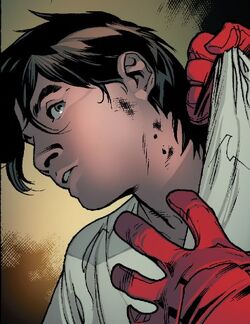 When we discovered Lucas here within his cocoon, we were elated. It wasn't until we examined his blood that we discovered just how dangerous he is. Within Lucas' blood is an insipid and pervasive toxin that sterilizes human beings. A living Inhuman agent of evolution.

Lucas was a NuHuman who was found by Hydra after the spreading of Terrigen Mist across the globe. After Lucas emerged from his cocoon, Hydra examined his blood and discovered within it a toxin capable of sterilizing human beings. Horrified and elated, they raced to devise an antidote in order to use the boy's blood in their plan to sterilize all the humans across the world (with the exception of Hydra agents, who would be given the antidote)[1] by spreading it through bombs that would be launched into the atmosphere, where they would detonate.[2]

Lucas was having his blood drained by a machine in a new Hydra basement in Ecuador when the new Captain America Sam Wilson and his partner Nomad arrived to neutralize it. They thought him to be a prisoner of Hydra and took him out of the machine, trying to escape from the base through an elevator afterwards. However, it ultimately led them to the presence of Baron Zemo and the other members of the Hydra High Sect.[3]

While Nomad stayed behind to fight Zemo and the others, Cap took Lucas with him to another place and discovered the elevator had somehow teleported them to Bagalia, a sovereign island nation ruled by criminals. It was then that Lucas revealed to him he was an agent of Hydra and shot him. While an injured Captain America fled, Lucas returned to Zemo Tower. After all the High Sect members took the Infinite Elevator (an elevator capable of teleporting to anywhere in the world), Lucas watched as Zemo revealed his plans to a beaten and chained up Nomad, who had his throat cut by Zemo afterwards.[1] Later, Zemo and his operatives went on with their plan.

After neutralizing the bombs in Castle Hydra[2] and India, Cap went to Hydra's Florida base to intercept a ship equipped with a pod containing fleas full of Lucas' blood, but, despite taking the pilot down, the ship still took off as Lucas was unwilling to let him thwart their plan and piloted it himself.[4]

Lucas released the fleas and ticks infected with his blood from the pod, but they were not able to infect anyone as Cap used his telepathic link with birds to make them eat the bugs. The birds also caused huge damages to the ship and it was about to crash when Cap, who had defeated Zemo with the help of Nomad (who had survived Zemo's attempted murder), showed up to save him. Afterwards, Lucas was taken by Cap to Paris, where Cap was going to confront Baron Blood, who drank a lot of Lucas' blood and was going to self-detonate in the atmosphere, thus serving as Hydra's contingency plan to spread Lucas' blood across the globe. Lucas was then left handcuffed to a light pole.[5]

Lucas was later found and captured by Misty Knight, who had been helping Captain America to neutralize Hydra's bombs all over the world.[6]

Like this? Let us know!
Retrieved from "https://marvel.fandom.com/wiki/Lucas_(Inhuman)_(Earth-616)?oldid=5801797"
Community content is available under CC-BY-SA unless otherwise noted.