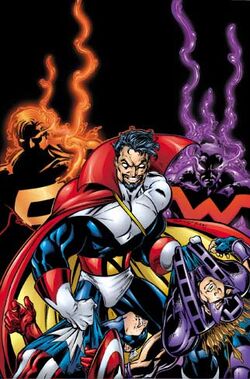 He has no idea what and who he is up against. What power he is taunting. Tell our friend Count Nefaria will see him now.

Count Luchino Nefaria was the descendant of a long line of Italian noblemen, and he inherited a vast fortune. Nefaria was also a man of unusual contradictions. He was conservative in many of his tastes and attitudes, and therefore dressed in the fashions Italian noblemen wore much earlier in the century. On the other hand, Nefaria was fascinated with technological advances, and throughout his life commissioned scientists to create inventions that were far in advance of contemporary science.[1]

Nefaria also greatly valued his family tradition of utter respectability, yet his lust for even greater wealth and power led him to become a powerful figure in the Maggia, the notorious international crime syndicate which has its origins in southern Europe, but included no noblemen. As a young man, Nefaria quickly made himself a powerful force in the Maggia through the offering of large sums of money to established Maggiosi, the financing of major criminal operations for the Maggia in return for shares of power, the advanced weaponry his scientists devised for him, and his own immense talent for criminal strategy.[1]

Count Nefaria's wife Reneta died in childbirth. He sent his newborn daughter Giuletta to the US to be adopted by the Frost family in order to give her a 'good life,' and partially because he had preferred a male heir instead. In their care she was given the identity "Whitney Frost."[2]

Battling the Avengers and X-Men

The newly formed Avengers devoted much of their time to the capturing of Maggia criminals and causing the shutdown of many profitable Maggia criminal operations. Count Nefaria decided to deal with the Avengers himself. Having planned to move to America anyway, Nefaria had his ancestral castle in Italy disassembled stone by stone and re-assembled atop the New Jersey Palisades. He announced that he was opening the castle to the public and that profits from admission fees would be donated to charity. He invited the Avengers to the opening day ceremonies. Once the Avengers were inside the castle, however, Nefaria trapped them under so-called "time transcender beams" which, in effect, put them into suspended animation. Nefaria then created life-size hologram-like images of the Avengers which he could project over great distances, which he could cause to move like living humans, and through which he could project recreations of the real Avengers’ voices. Nefaria caused the images to publicly proclaim that the Avengers were going to seize control of the United States. As a result, the real Avengers, once they were set free, found themselves in conflict with the United States Army. The Avengers finally defeated Nefaria, who confessed his guilt in framing them. The Avengers were cleared and Nefaria was publicly exposed as a criminal and deported to Italy. Many of Nefaria's criminal allies and employees deserted him and he was now no more than one among many Maggia "family" heads.[1][3] In retaliation, Nefaria then unsuccessfully attempted to destroy Iron Man.[4]

Months later, Nefaria tried to hold Washington DC for ransom, although he was defeated by the X-Men and Professor X.[5] He clashed with the X-Men again when he, together with the Ani-Men, took control of Valhalla Base and the Doomsmith computer.[6] The Doomsmith was capable of launching the entire nuclear arsenal of the United States.[7] The X-Men defeated the Ani-Men, but Nefaria escaped in a stolen Harrier Jump Jet. Thunderbird leaped onto the aircraft in an attempt to stop the Count but was killed when the plane exploded.[8]

By now, Nefaria was virtually destitute. He decided he would have himself given superhuman powers greater than those of virtually any other human being. Nefaria formed the second Lethal Legion, consisting of the Living Laser, the original, criminal Power Man, and the Whirlwind. Nefaria then had professor Klaus Sturdy, former chief assistant to Baron Heinrich Zemo, increase these three criminals’ powers for roughly an hour, and sent them to battle their old enemies, the Avengers.[9]

But Sturdy and his assistants had also analyzed the cellular and genetic structure of the three superhumanly powerful criminals, and used their findings to duplicate their powers in Count Nefaria, but magnified a hundredfold. Once empowered, Nefaria mortally wounded Sturdy so that he could never give equal powers to someone else.[10] But the dying Sturdy told Nefaria that his new powers were causing the Count to age at incredible speed, so that Nefaria would be dead in two days. (Actually, Sturdy was lying, and Nefaria lived beyond the two day limit.) Sturdy said that only he himself could control the aging process, but now he could not because he himself would be dead. Crazed with fear and rage, Nefaria attempted to destroy New York City, but was stopped and captured by the Avengers.[11]

It was revealed the the power gain was killing him due to causing rapid aging. Treatments were found to restore him to normal, but Madame Masque distrusted the Avengers.[12] She and the Ani-Men attacked them to free her father and gain revenge on Iron Man.[13] In the process Nefaria's weakened form was crushed and appeared to have died.[14]

Count Nefaria was resurrected to join the Legion of the Unliving.[15][16]

He resurfaced as an ionic being seeking revenge against the Avengers. It seems that he received enough treatment so that his subordinates the Death Squad could eventually revive him. He revealed to Iron Man that he was now pure ionic energy but needed to drain others of their energy to maintain himself.[17]

Captain America and Ka-Zar managed to capture the Count in the Savage Land while he was conducting experiments to create a race of ionic beings. He was still in a weakened state and was prevented from using a ship with a special cybernetic link to escape. It is unclear how he escaped but he claimed they could never hold him and it is likely that the Maggia came to free him.[18]

Nefaria's new master plan was to bombard the Earth with ionic energy using an ionic bomb; the survivors would become ionic beings that he could control and drain at his leisure.[19] He attacked and gained control of Wonder Man and Atlas to assist him. The combined efforts of the Avengers, Thunderbolts, and Madame Masque were barely able to stop him.[20] He again appeared to have been killed when the ionic bomb went off and only Wonder Man and Atlas remained.[21]

Nefaria was captured by S.H.I.E.L.D.. However, he was revealed to be in The Raft and subsequently freed along with a number of other super-powered criminals by Electro.[22]

Years later, Nefaria was about to help the Hood get new powers after he lost them during the Siege of Asgard. The New Avengers did not allow this to happen, as they attacked the Hood and Nefaria. Ms. Marvel fought Nefaria, and was able to keep her ground for some time, until Nefaria returned fire and beat her down. Wolverine entered the battle, slashing Nefaria's body and face several times, allowing Ms. Marvel to absorb all his power, thus rendering him unconscious. Nefaria was then taken by the Avengers, and placed in S.H.I.E.L.D. custody.[23]

Count Nefaria reassembled the Lethal Legion when he set out to find a new source of power in the Catalyst, a device created by Project P.E.G.A.S.U.S. After raiding the Project P.E.G.A.S.U.S. Facility to kill the scientist who discovered it and prevent his knowledge from being shared to anybody else,[24] the Lethal Legion attacked a public demonstration for the Catalyst taking place at the Empire State University. The attack was interrupted by Spider-Man, but he was overpowered by the villains.

The Lethal Legion was ultimately stopped by the murderous vigilante Sin-Eater, who shot each member of the Legion and Nefaria. However, due to his new supernatural nature, when the Sin-Eater killed the Lethan Legion, he also stole their sin and their powers. This process also returned Nefaria and the rest of the villains back to life, filled with a new-found sense of repentance for their crimes. They were all transferred to the Ravencroft Institute, where they became model patients. When reporter Norah Winters tried to interrogate Nefaria he had a mental breakdown over his guilt.[25] After the "sins" accumulated by the Sin-Eater were transferred into the Order of the Web[26] and then they were expunged from this corruption,[27] they went back to their original hosts.[28] It can be presumed that Count Nefaria returned to normalcy this way.

Count Nefaria was a normal human until subjected to a process perfected by one of Baron Heinrich Zemo's scientists, Dr. Kenneth Sturdy, which granted him the combined powers of the villains the Living Laser (energy projection), Power Man (strength), and Whirlwind (speed), amplified a hundredfold. Because of this, Nefaria is one of the physically strongest known humans.[29]

Nefaria is a criminal scientist. He is also a formidable combatant with a good deal of experience in using his powers in combat situations.[29]

Adamantium: Adamantium is one of the few materials that can truly injure Nefaria, for despite his physical imperviousness Logan was able to bleed him.[23]

Ionic Lock: A counter ionic energy device that temporarily binds and isolates an ionic energy user's powers or dissipates their material energy forms.[21] The device was not strong enough to work on Nefaria without an Intensifier unit. Once added, however, it makes a target's power reject energy from their body, greatly weakening them given time.[33]

Electro-Disc: Designed to communicate instantly and easily with his American family members, the disc allowed a three-dimensional image of whoever was in contact with the disc to be projected into his presence, thousands of miles away in his castle in Sicily.[1]

Time Transcender Ray: These devices bath their target in a soothing, hypnotic light that effectively places them in a state of suspended animation until the ray is deactivated.[1]

Visio-Projector: The Visio-Projector was a variation on the electro-image technology with which Nefaria had previously created duplicates of the Avengers. It was designed to generate complex three-dimensional images.[1]

Dream Machine: A group of scientists in Norway who he funded had invented a machine, which could be used to psychically manipulate the dreams of a chosen target. So powerful was this manipulation that if the machine's target died in their dream, they would die in real life.[34]

Like this? Let us know!
Retrieved from "https://marvel.fandom.com/wiki/Luchino_Nefaria_(Earth-616)?oldid=6442995"
Community content is available under CC-BY-SA unless otherwise noted.