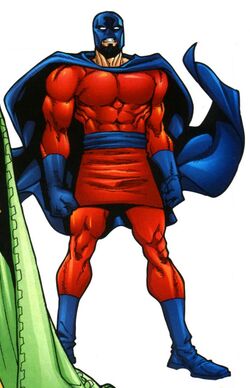 Gallery
Real Name
Unknown
Current Alias
Lucifer
Aliases
Agent One, Heylel[1]
Affiliation
The government of the Arcane
Base of Operations
The "Nameless Dimension"; formerly the planet Quistalium; a walled city in Tibet; a cavern in the Balkan Mountains; a hidden base in the American Southwest
Status
Living Status
Deceased
Identity
Secret (The general populace of Earth is unaware of the real Lucifer's existence, although the existence of his human counterparts is publicly known).[2]
Citizenship
Quists
Marital Status
Single
Occupation
Advance agent for the invasion of Earth by the Arcane (Quists)
Education
Unrevealed, apparently extensive in advanced Quistalian science
Characteristics[7]
Gender
Male
Weight
325 lbs (147.42 kg).
Height
6′2″ (1.88 m)
Eyes

An alien, he first came to Earth as the vanguard of an alien invasion, which was foiled by the young Charles Xavier (later Professor X, leader of the X-Men). In retaliation, Lucifer dropped an enormous stone block on Xavier, leaving his legs crippled so that he would need a wheelchair.[3] Lucifer made several later attempts to conquer Earth, all foiled by the X-Men, Iron Man, or other heroes, although one of his attempts did force the first X-Men team to confront the original Avengers due to a misunderstanding.[4]

He was eventually banished to an alternate realm known as the Nameless Dimension,[5] but he continued to try and conquer Earth by imbuing humans with ionic energy and turning them into his minions. His masters, notably the Supreme One, ultimately apparently "terminated" him for his failures, and replaced him with the computer Dominus.

Lucifer resurfaced, and settled in Lago, New York. Since the small town was a center of anti-mutant bigotry, the hate and fear that fueled the townspeople made them particularly susceptible to Lucifer's influence. As a result of Lucifer's influence, the inhabitants of Lago became uncharacteristically passive. Charles Xavier caught notice of Lucifer's whereabouts and lured his former pupils, four of the original five X-Men, to the town. He waited until his former pupils noticed something was amiss with the townspeople, namely that they didn't react negatively to them despite being a town that hated mutants. Xavier informed them of Lucifer's activities, and then took the X-Men to a warehouse where Lucifer congregated the townsfolk at night. With Lucifer's influence threatening to take hold of the mutants, Xavier informed them they needed to kill him. Angel changed into his Archangel persona and decapitated Lucifer. The severance of Lucifer's psychic link with the inhabitants of the town proved too traumatic for them, and all of the townspeople died.[1]

Essence Fusion: Lucifer could also fuse his physical and mental essence with another sentient being. In doing so, Lucifer created a psychic link between himself and his host. The host retained his own will but was in constant psychic contact with Lucifer. The fusion endowed the host with some of Lucifer's superhuman powers for as long as the merger lasted. Lucifer also had limited telepathic abilities, and had the ability to create and maintain a psychic link with his host or hosts while fused with them. The effect of Lucifer's control caused his victims to enter in a state of emotional bliss. Lucifer could fuse with countless of people, and at one point managed to fuse himself with the entirety of a small town. It is possible for a telepath to sever the link between Lucifer and any of his hosts, but they need to be careful since in most cases, severing Lucifer's connection with a host will prove fatal to the host.[1]

Lucifer has a gifted intellect, and extensive knowledge of advanced Quistalian science and technology, and talent as an inventor using this technology.

He used Dominus, a highly advanced computer complex created by the Arcane that could blanket a world with mind-deadening rays, enabling the Arcane to enslave its populace. Dominus was operated by "Ultra-robots," which could fly and project destructive energy beams. All his equipment was designed by Lucifer himself and Quistalian scientists.

Like this? Let us know!
Retrieved from "https://marvel.fandom.com/wiki/Lucifer_(Quist)_(Earth-616)?oldid=5506626"
Community content is available under CC-BY-SA unless otherwise noted.