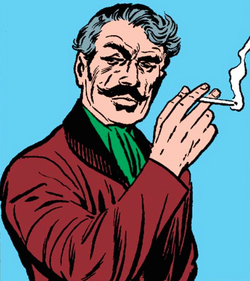 Lucius Farnsworth was a mutant, gifted since birth with various abilities, among them telepathy, mind control, and size alteration. Thanks to those abilities, he was able to communicate with bees and could approach them without protective gear such as netting. With his bees, Farnsworth was the most successful honey producer in his state.

As he didn't trust banks, he kept a fortune in his house. One of Farnsworth's employees, Eric, spied on him to learn the combination to his safe and broke into his house, only to be surprised by Farnsworth who had woken up for a midnight snack.

After Eric aimed a gun at Farnsworth and shot at him, Farnsworth used his powers to control Eric and take his gun. He then forced Eric to go to the apiaries, while revealing his status as a mutant. Once there, Farnsworth shrunk the two of them down and forced Eric into the hive where he let his bees hunt him.

Stopping the bees at the moment they were going to sting him, Farnsworth made Eric swear he would not try to rob or injure him, and they were both returned to their original size. Farnsworth claimed the whole event was an illusion that had created when Eric pointed a gun at him, but afterwards Eric let drop a tiny metal object, what he thought to be his still miniaturized gun, leaving him in doubt forever.[1]

A millionaire, Farnsworth later retired in the Farnsworth Estate. There, he witnessed the beauty of his garden, taken care by the gardener George. Farnsworth encouraged George to open his own landscaping business, offering him to back him financially. George kept refusing, content to be in his position.

One day, one of his plants mutated due to exposure to radioactive dust (originating from a neighboring atomic experimentation facility), becoming a sentient Weed, able to talk and control other living creatures. Before Lucius could remove it, his body was paralyzed by the Weed, who revealed to him its plan of controlling mankind before putting him into a deep sleep, as it intended to rest as well in order to increase its powers.

During its sleep, it was destroyed by George, unaware of its powers. Farnsworth was immediately awoken, and secretly thankful that George hadn't taken his offer, leading to his role in saving humanity.[2]

Lucius Farnsworth was a mutant, gifted from birth with various abilities,[1] including:

It is unknown if he could enlarge himself and/or others as well.

Farnsworth claimed his size alteration and bee talking were an illusion (despite proof arguing otherwise).[1] It is unknown if he really possessed all of those powers.

Despite this, in both possibilities, his hypnosis abilities are confirmed.[1]

Despite being named the same way, created at the same period by the same creative team, and having similarities in their wealth and appearance, there is no strong confirmation of them being the same character. Despite this, the Appendix to the Handbook of the Marvel Universe considered them to be the same.[3]

Like this? Let us know!
Retrieved from "https://marvel.fandom.com/wiki/Lucius_Farnsworth_(Earth-616)?oldid=5812242"
Community content is available under CC-BY-SA unless otherwise noted.