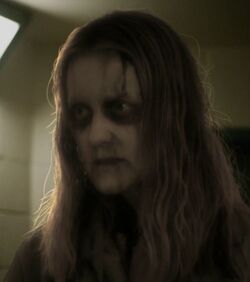 Lucy Bauer and her husband Joseph were working for the Momentum Alternative Energy Laboratories when they discovered the ancient tome known as the Darkhold. They sought to use its knowledge to create new technology, but were betrayed by Eli Morrow, who beat Joseph into a coma and forced Lucy and her co-workers into the Quantum Particle Generator, which forced them to become stuck between dimensions.

Morrow then trapped Lucy and the others into one of the Quantum Batteries each, where they experienced no passage of time into the box-like looking battery was opened.[1] Years later, Lucy's battery was stolen by Chen and his gang, and after they opened it, Lucy was able to escape and infected those arround her, causing them to see horrifice nightmares. She then departed her prison to find and free her former co-workers and locate the Darkhold, hoping that it could help reverse their condition.[2]

Like this? Let us know!
Retrieved from "https://marvel.fandom.com/wiki/Lucy_Bauer_(Earth-199999)?oldid=5521387"
Community content is available under CC-BY-SA unless otherwise noted.