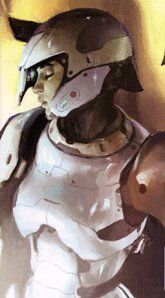 After successfully completing training at Camp Hammond, Gadget was assigned to the Nebraska team with Paragon and Captain Ultra.[1]

While checking an alarm, Gadget and Paragon were attacked by Graviton. Gadget was crushed to the size of a billiard ball, instantly killing her. Although initially Hall was suspected, it turned out that Roth was her killer.[1]

Before her death, Gadget had been going through case files and discovered a large amount of missing person cases in the area. These missing persons were apparently being used as test subjects.[2]

Gadget used an armor of her own design. Its abilities other than illumination and infrared scanning are unknown.

Like this? Let us know!
Retrieved from "https://marvel.fandom.com/wiki/Lucy_Cervantes_(Earth-616)?oldid=6119269"
Community content is available under CC-BY-SA unless otherwise noted.