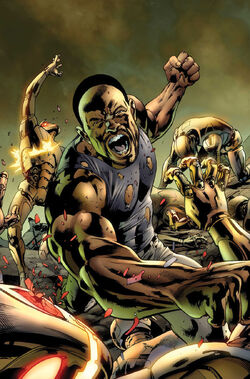 Months after his return[1], Ultron launched a massive and sudden attack on New York, and the rest of the world, quickly taking over the whole planet[2], and slowly starting to remold it into his own shape. Luke was among the heroes and citizens in a refuge from Ultron sentinels, which guarded the streets looking for any fugitive. Tony Stark provided enough technology to keep them safe from Ultron.[3] When it was heard he Ultron trading super-powered people for unknown reasons, Luke Cage and She-Hulk offered to investigate, faking an attempt to trading. After arriving to Ultron's lair, the heroes found the trader was none other but Vision.[4]

The android revealed Ultron was using him as a conduit, actually punishing humankind from the future. Luke decided to unveil the true reasons for their meeting, and was forced by She-Hulk to get back to the refuge while she was killed covering his back. Thanks to his indestructible skin, he even managed to survive a nuclear explosion from Ultron's sentinels. Dying from radiation, Cage secretly managed to get to a Quinjet and follow the rest of the resistance to the Savage Land, where Emma Frost used her psychic powers to detect him in the nearness and inform the rest of the heroes the truth he and She-Hulk had discovered.[5]

Like this? Let us know!
Retrieved from "https://marvel.fandom.com/wiki/Luke_Cage_(Earth-61112)?oldid=6007403"
Community content is available under CC-BY-SA unless otherwise noted.