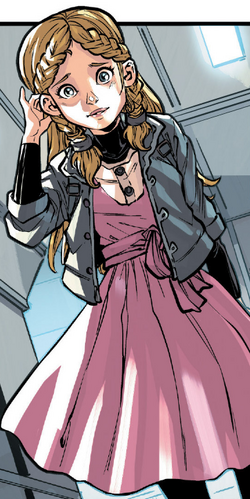 Is this Earth? Why does it smell so bad?

Luna Maximoff was the daughter of Quicksilver and Crystal. She was named after the Moon, having been born there.[8]

The first child to be born to what at the time was believed to be a mutant and Inhuman, became otherwise known as a so-called "Inmutant" as an Inhomo superior, with the genetic markers denoting these subgroups in humanity supposedly "canceled out" in her, leaving her a seemingly normal human.[9]

It would be revealed years later by the High Evolutionary that Quicksilver wasn't a mutant but a mutate he created and disguised a mutant,[10] making Luna a Human/Inhuman hybrid. While Quicksilver, aghast at the thought of having a human daughter, initially sought to expose her to the Inhumans' mutagenic Terrigen Mists, he was talked out of this,[11] secretly by Gorgon and Karnak, who were impersonating Lockjaw to make their point.[12]

Years later, when Luna was six years old, Quicksilver was depowered by the Decimation of mutant-kind. Desperate to get his powers back, he exposed himself to the mists, and subsequently talked Luna into returning to Earth with him, where he exposed her to some collected mist as well, believing this to be a birthright she had thus far been denied. The process was successful, and granted Luna the ability to sense, remove, and alter the emotions of others at will.[13]

Luna accompanied Quicksilver on his quest to re-power mutants using the mists, encountering the man they believed to be her grandfather, Magneto. After sensing deep sadness in him, and offering to remove it, Magneto scolded her, saying that she must never tamper with the emotions of others against their will. After Magneto and her father engaged in a vicious argument that turned violent, Quicksilver physically assaulted Magneto before realizing that he should not endanger Luna by keeping her with him, and left her to be retrieved by her mother and the other Inhumans.[14]

The Inhumans later declared war on the United States of America when the O*N*E* refused to return the stolen Terrigen Crystals they had taken from Luna's father. Luna, still only six years old, became determined to fight to defend Attilan if they should come under attack and began training how to fight under Karnak. During one such training session, Luna saw that the humans were using the Terrigen Mist on Earth. Luna went with other members of the Royal Family to confront her father who had kept some of the stolen Crystals for himself.[3]

When Pietro revealed that the Terrigen Crystals he still possessed were imbedded in his body, deeply disturbing Luna, and leading to a fight with Black Bolt who Luna begged to stop. Pietro revealed that using the powers the crystals had granted him, he had traveled into the future where he witnessed an explosion on the surface of the Moon visible from Earth, deducing that it was Attilan. Pietro wanted his daughter kept somewhere safe away from Attilan because of this, but Luna refused and told him that she was an Inhuman and that her place was with her people.[2]

Medusa asked Luna to visit her uncle Maximus and try to 'cure his insanity' with her powers, Luna did not want to go along with this idea but agreed at Medusa's request, unaware that her aunt was being manipulated by Maximus. Luna used her power to remove the mental blocks the Pacifiers had placed inside him, to quell his powers.[15]

Human members of the United States Marine Corps, altered by terrigenesis into an expendable kamikaze squad, were sent as an invasion force to Attilan to kill the Inhumans. Luna expressed her desire to fight but was told she was too young by her mother and left in Medusa's care. Medusa took Luna with her as Maximus used his unleashed powers to ensure his freedom and was then used to awaken her cousin Ahura. Alongside her family Luna witnessed the marines supposed surrender before one marine was used as a suicide bomber to attempt the destruction of Attilan, which allowed Maximus to exert his powers on the Inhumans to have Black Bolt imprisoned and place himself in charge. Luna later went to visit her uncle Black Bolt in the dungeons below Attilan and revealed to him what she been made to do and that they were the only two Inhumans not under Maximus' direct control, while asking him for his help.[16]

Luna accompanied the Inhumans when they moved Attilan to Hala in order to take up rulership of the Kree Empire after Attilan was attacked by Skrulls during the Secret Invasion.[17] Her father visited the Inhumans on Hala, bringing with him the long lost Terrigen Crystals and claiming that a Skrull impostor had been the one that stole them. While her father was pardoned and forgiven by the Inhumans, including Crystal, Luna told him that she knew he was lying and that while she would keep his secret out of love for him, she could never forgive him for what he had done.[18]

Eventually Quicksilver made a full confession on network television about the lies he had told and owned up to his deceptions. Luna was so moved by his actions that she sought him out and the two fully reconciled.[19]

Luna later began attending classes at the Braddock Academy in England while her mother pursued the Terrigen cloud.[6]

Aura Vision: Luna can 'see' the feelings of others as colorful auras. These states are represented to her as various cascading colors that she learns to interpret and to change for various effects. Her ability also grants her a number of others that she can utilize with some degree of skill:

Terrigen Crystals Connection: Due to being exposed to the Mists on so many occasions while on Earth with her father, Luna developed a bond with them and was able to sense that the Terrigen Mist was being used on Earth.[3]

Trained in combat, including the use of a sword, by Karnak.[3]

After receiving her powers, Luna had trouble controlling them and wore shades at all times. It appears that she gained enough control of her powers to no longer require them later on.[14]

Like this? Let us know!
Retrieved from "https://marvel.fandom.com/wiki/Luna_Maximoff_(Earth-616)?oldid=5891766"
Community content is available under CC-BY-SA unless otherwise noted.