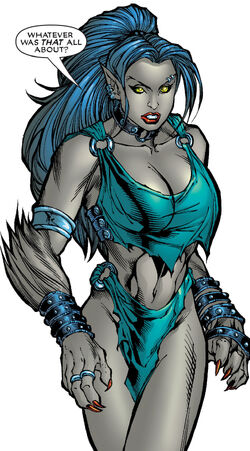 Unlike many of the Savage Land Mutates, Lupa was genetically altered from her normal state not by Magneto, but Brainchild. Lupa's first test came when Brainchild asked her to help him settle an old score with his enemy, Storm. Calling on her newly endowed powers, Lupa enslaved Beast, hoping he would turn on his teammates who had come to Storm's aid. But her newly created abilities were no match against the much more skilled and trained Beast. He broke free of Lupa's control and helped the other X-Men defeat the Mutates.[1]

Feral Physiology: Lupa is a mutate with enhanced strength, speed, reflexes and reactions, agility, and durability. She also has hyper keen senses, including night vision.[citation needed]

Pheromones: She can emit pheromones that puts bestial creatures under her thrall. She has some difficulty controlling more intelligent ones with strong wills.[citation needed]

She uses the Blood Lotus Flower, which has will-sapping properties, which makes it easier to control more intelligent beasts, such as Beast.[citation needed]

Like this? Let us know!
Retrieved from "https://marvel.fandom.com/wiki/Lupa_(Savage_Land_Mutate)_(Earth-616)?oldid=4924562"
Community content is available under CC-BY-SA unless otherwise noted.