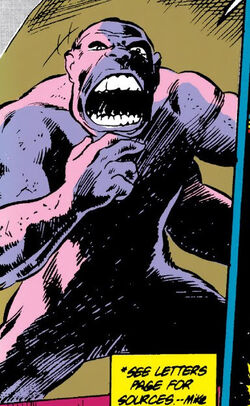 Like each of the Fear Lords, the Lurking Unknown was a mystery, and his origin (or even his very existence) was known to few.[1][2]

The Lurking Unknown was a extra-dimensional being that gains his powers from the fear of other lifeforms. It claimed to have destroyed world after world, never had having been defeated. Odin the All-father had the power to summon the creature and used the creature to test young Asgardians in a right of passage.

Thor requested his father the permission to marry his long time love the mortal Jane Foster. Odin decided to test her worthiness so granted her the powers of an Asgardian and sent her to meet with the Lurker.[3]

Jane faced the creature head on but was overcome with fear and called for help from Thor. He easily defeated the creature, but with Jane's failure Odin banished Jane from Asgard. Thor then travelled to fight the Lurker in the Crystal Glade of Gundershelm. Due to losing Jane, Thor was easily defeated. Lady Sif intervened and helped Thor regain his courage.[3]

The Lurker was one of the founding members of the Fear Lords, beings with plans to plunge Earth into a state of eternal fear. Straw Man however, refused to join and betrayed the Fear Lords by asking Doctor Strange for help against them.[4]

The Lurker found Straw Man and burned his fragile body. Dr. Strange and his wife Clea, through force of will, overcame their fear of the creature. Without anything to feed on, the Lurker shrank in size to the point were Dr. Strange could crush it in his hand. The Lurker was captured in a small ball of mystic energy.[5]

Size variation and power fluctuation contingent on the Lurking Unknown's ability to instill fear. This could potentially make Lurking Unknown nigh unstoppable, enhancing his strength, speed and durability to levels unmeasurable. Under certain conditions Lurking Unknown has been known to lift in excess of 100 tons, and enhanced his durability to the point he had become invulnerable. Also has the ability to generate fire with its right hand.

Any opponents of the Lurking Unknown that do not fear him, deprive him of power and can even cause him to weaken and shrink.

Like this? Let us know!
Retrieved from "https://marvel.fandom.com/wiki/Lurking_Unknown_(Earth-616)?oldid=5436628"
Community content is available under CC-BY-SA unless otherwise noted.