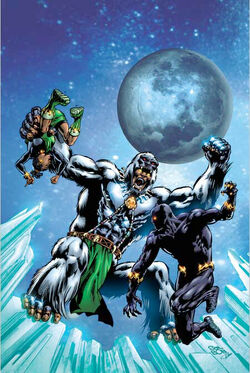 You have no need to know my true name, fool! For those who speak it do so only in whispers -- fearful whispers, lest they reach the ears of... the Man-Ape!

M'Baku was born and raised in the Jabari Village within the nation of Wakanda, Africa. He was one of the greatest warriors of the African nation Wakanda, second only to T'Challa, the Black Panther himself. While the Panther, King of Wakanda, was on leave from his royal duties to serve the Avengers in America, the ambitious M'Baku plotted to usurp the throne. The Wakandan culture evolved from a hunter-warrior society and was traditionally ruled by its greatest warrior. The Black Panther outlawed the rival White Gorilla cult from Wakanda while the Panther cult was dominant. M'Baku flouted T'Challa's edicts and revived the White Gorilla cult, personally stalking and killing one of the rare white gorillas living in the jungles near Wakanda. Bathing in the gorilla's blood and eating the gorilla's flesh mystically conferred its great strength upon M'Baku.[1]

When the Black Panther returned to Wakanda with the Avengers, M'Baku, calling himself the Man-Ape, openly challenged the Panther's right to rule. M'Baku deplored T'Challa's technological revitalization of Wakanda and sought to have all technology outlawed so the nation could return to primitivism. After a protracted battle, the Man-Ape bested the Panther; however, when he bound T'Challa to the giant statue of a panther and tried to topple it upon his enemy, the statue instead crumbled, burying M'Baku.[1]

The Black Panther, believing the Man-Ape was crushed,[1] returned to New York with the Avengers. But M'Baku's chief supporter N'Gamo revived the rebel.

M'Baku followed the Panther to New York. There the Man-Ape allied himself with the Grim Reaper and his Lethal Legion, a short-lived team of Avengers' foes including the Living Laser, Power Man, and the Swordsman. The Man-Ape kidnapped Monica Lynne, the Black Panther's American girlfriend, and lured the Panther into captivity. When the rest of the Avengers came to the Panther's rescue, Captain America bested the Man-Ape.[2]

The Panther decreed if the Man-Ape returned to Wakanda, he would face the death penalty. Humiliated, the Man-Ape chose to wander the less civilized parts of the world, performing mercenary work to survive and keeping a low profile. He was eventually contacted again by the Grim Reaper, who was trying to assemble a new Lethal Legion to exact revenge upon the Avengers. The Man-Ape served as one of the Grim Reaper's henchmen until the Reaper's racist attitudes prompted the Man-Ape (and fellow Legionnaire Black Talon) to abandon the Reaper's cause.[3]

M'Baku joined the seventh incarnation of the Masters of Evil gathered by the Crimson Cowl (Justine Hammer); however, he was sucker-punched by the Thunderbolts as they infiltrated the Masters' base, having no part to play in the battle that followed.[4]

M'Baku represented the Jabari Tribe at the Pan-African Congress on the Treatment of Superhumans, hosted in Wakanda in search of a consensus on how to react to the American Superhuman Registration Act. The representatives failed to reach an agreement before the Congress disbanded.[5]

Totemic hunter Morlun was resurrected in Wakanda, where he murdered Man-Ape by sucking the life out of him and feeding on his totem.[6]

He reappeared alive and joined the Villains for Hire assembled by the Purple Man and Headhunter to build a criminal empire by selling their services to the highest bidder as opposition to the Heroes for Hire.[7]

At some point in time, Man-Ape was imprisoned by S.H.I.E.L.D. in Pleasant Hill, a prison in the form of a small town where its inmates had their memories and appearances tampered with using a sentient Cosmic Cube named Kobik, so they could be turned into model citizens. M'Baku, and a group of villains led by Baron Zemo, snapped out of this fantasy world and returned to their true selves. They attacked the village from within, wreaking havoc and freeing the other prisoners from Pleasant Hill's control.

When the bad guys took notice of the presence of the Avengers on the scene, they used their numbers to their advantage and mercilessly struck down the heroes; however, Kobik took compassion on the Avengers and healed them.[8]

M'Baku died yet again, this time under unknown circumstances, and the mantle of the White Gorilla was taken up by his brother, Mandla, though he too eventually joined M'Baku in death.[9]

Baron Macabre raised M'Baku from the dead via an elaborate ritual that granted Man-Ape supernatural powers;[10] however, Macabre believed the arrival of Kantu's mechanical drones were a bad omen, thus M'Baku soon cast the shaman aside for lacking faith in him and seemingly having already served his purpose. After Man-Ape was eventually dealt with by the combined efforts of Black Panther, Kantu, and Shuri, Macabre stripped him of his newfound abilities and fled.[11]

Man-Ape possesses various superhuman abilities as the result of a magical ritual of transference with the sacred White Gorilla.[12]

Superhuman Strength: Due to the ritual, Man-Ape possesses superhuman strength enabling him to lift up to about 2 tons.[12]

Superhuman Stamina: Man-Ape's advanced musculature produces less fatigue toxins during physical activity than the musculature of an ordinary human. He can physically exert himself at peak capacity for up to a day before the build up of fatigue toxins in his bloodstream begins to impair him.[12]

Superhuman Agility: Man-Ape's agility, balance, and bodily coordination are enhanced to levels that are significantly beyond the natural physical limits of even the finest human athlete.[12]

Superhuman Durability: Man-Ape's bodily tissues are somewhat harder and more resistant to certain types of injury than the body of an ordinary human; however, he is far from invulnerable. Man-Ape's body is more resistant to blunt force and impact trauma than the body of an ordinary human. For example, he can withstand being hit repeatedly by a superhumanly strong adversary or falling from a height of several stories with little to no injury to show for it, whereas an ordinary human would be severely injured or killed.[12]

Man-Ape is a seasoned warrior and skilled hand to hand combatant. Since gaining his powers, he's become an even more formidable combatant.[12]

Like this? Let us know!
Retrieved from "https://marvel.fandom.com/wiki/M%27Baku_(Earth-616)?oldid=6105515"
Community content is available under CC-BY-SA unless otherwise noted.