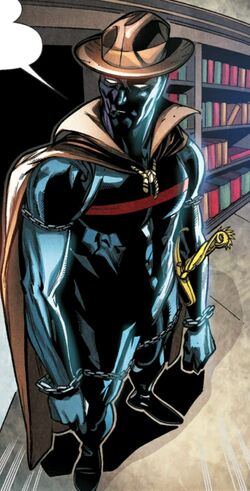 As a child, M'Nai was the lone survivor of a British attack on a village of Fu Manchu's agents. Fu Manchu saw the hatred in the boy's eyes and decided to raise him alongside his own son Shang-Chi, who became M'Nai's best friend. After Shang-Chi broke with his father, Fu Manchi sent M'Nai, now called Midnight, to locate him. They fought a duel which ended with M'Nai breaking his neck after falling off a construction crane.[2]

Not long after his death, Midnight's essence was snatched from the timeline by Immortus, and he was briefly a part of Kang the Conqueror's Legion of the Unliving.[3] In this state, he battled the Avengers' ally Mantis, herself a world-class martial artist.[4] After Kang's defeat, Midnight was returned to oblivion.[5]

He was later recovered and restored to life by the Kree, who revived his brain and implanted it into a cloned body.[1]

Midnight Sun along with White Dragon, were killing various clan leaders, to use them in a black magic ritual to give Midnight Sun all the power, and influence over all the clans, accomplishing what his father wasn't able to. His brother Shang-Chi, and Skull-Crusher, who were investigating Leiko Wu's death, came to White Dragon's castle trying to find answers, they found the room where the ritual was taking place, with the various clan leaders decapitated heads spiked on a circle of swords. They were confronted by White Dragon, and after defeating him, Midnight Sun intervened, shackling both of them to the wall using his mystical powers. He then decapitated both, Skull-Crusher, and White Dragon who offered himself, to used them as the last two clan heads in the ritual.[6]

When Midnight Sun performed the ritual, instead of giving him power over all the clans, it resurrected Leiko Wu, who was now true clan leader of Skull-Crusher's clan. She summoned the spirits of the deceased clan leaders, who pulled Midnight Sun into the underworld, he begged for his brother help as he was being pulled, saying all he wanted to do was honor their father.[7]

Artificially Enhanced Clone Body: After his death, Kree scientist Kar-Sagg transformed him into a Kree agent. He transferred Midnight's brain into a powerful cloned body. The Midnight Sun clone body gave him enhanced strength, speed, durability, coordination, martial skill, etc. to a tremendous degree. Even in the depths of space, he's capable of overtaking the Silver Surfer himself with unbelievable skill, speed, and precision. His affinity for darkness has likewise been magnified, and he basically turns invisible (even to the Surfer's formidable senses) in the dark.[1]

Like this? Let us know!
Retrieved from "https://marvel.fandom.com/wiki/M%27Nai_(Earth-616)?oldid=5837638"
Community content is available under CC-BY-SA unless otherwise noted.