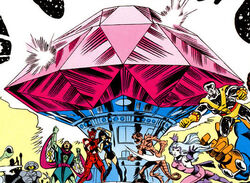 
(Colloquial Spelling: M'Kraan)
Owners
Current owner(s)
Shi'ar Empire, Intergalactic Empire of Wakanda (shard)
Physical Characteristics
Type(s)
Jewel
Model
Unique
Origin
Origin
Magical, An empty world, that is so far away from everything else in the universe, that the lights in the sky are not individual stars, but entire galaxies.
Reality
Multiverse
Creators and Appearances
Creators
Chris Claremont, Dave Cockrum
First Appearance
X-Men #107
(October, 1977)

Shi'ar legends said that the homeworld of the M'kraan Crystal was the first planet to form and was as old as time. Whatever race lived there was long gone and the only structure that withstood the ravages of time was the M'kraan Crystal. It is said its creators named the Crystal "the end of all that is." Since its discovery the planet remained under Shi'ar protection.[2]

The M'kraan Crystal was a huge pink crystal of unknown origins, which was older than known history. Inside of the crystal there was a beautiful alien city, that outstretched, by far, the "logical" volume that should have been allowable. Also there was no movement, as time and space had no meaning here. At the center of the city was a glowing energy sphere, which hosted a neutron galaxy. The sun of this neutron galaxy was a nexus point of all matter and antimatter of not only the universe, but all the different realities in existence. The crystal also housed the White Hot Room.[3]

Should the Crystal's stasis fields be destroyed, the gravitational forces would extend into the universe, drawing all of it into a black hole, causing the universe to collapse. This was why the crystal was was often referred to as the "Nexus of all Realities". Every million years, when nine galaxies, seen as mere stars from the homeworld, enter a certain alignment, the Crystal would open a gateway to what legend said was absolute power. For this reason, the crystal was guarded by powerful beings named Jahf and Modt.[4]

Emperor D'ken of the Shi'ar Empire attempted to use the legendary power of the M'kraan Crystal. His sister Lilandra, rightly believing such an attempt would destroy the universe, enlisted the aid of the X-Men to stop his plan. With the help of the Starjammers, D'ken was defeated. The Crystal was repaired by the power of the Phoenix Force (who had taken the form and persona of Jean Grey) and the universe was saved.[5]

Like this? Let us know!
Retrieved from "https://marvel.fandom.com/wiki/M%27kraan_Crystal?oldid=6435638"
Community content is available under CC-BY-SA unless otherwise noted.