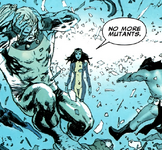 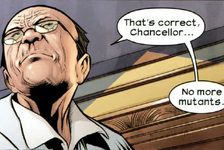 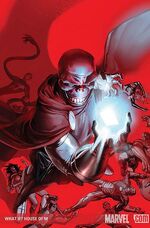 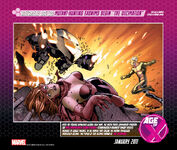 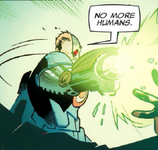 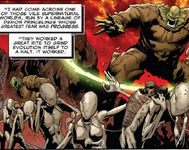 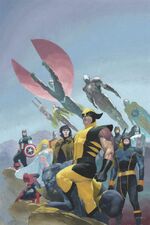 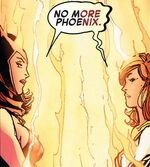 In this reality, the Decimation was a plan made up by the X-Terminated's scientist, the Dr. Moreau, after having heard of Earth-616's Decimation via the strike team X-Force.

Moreau create four clones of the Scarlet Witch, intending to have Jean Grey entering her mind to depower the Weapon Omega.

This plan was contraried both by Magneto's anger to see his daughter used in this way, destroying all the clones except for one, and by the attack of Omega's troops. Jean Grey was forced to operate quick, and her actions led to the depoweration of only her and her fellow X-Man Sabretooth.

Here a virus was developed by two scientist from the South East Asian Republic (SEAR), with low-intensity symptoms, inoculated to several people send to travel, in order to spread it. It function was to prevent the contraction of the X-Gene, which itself originates from a virus, and in essence wipeout the the human mutant genome.

At the end of the House of M, the Scarlett Witch pronounced the words "No more powers", depowering all powered beings on Earth, including Mutants, Inhumans, mutates, or Skrulls. The only power left was the Cosmic Cube.

The M-Day consisted on this earth of the assault by Magneto's Brotherhood against the productors of the Mutant cure, the Worthington Labs, and the source of it, the mutant-powers suppressor Jimmy.

Magneto assaulted the Alcatraz Island where were settled the Worthington Labs complex, using the Golden Gate Bridge as a transport for his followers.

A massive human depoweration and hecatomb happened there, as the U.S. soldiers were equipped with Mutant cure-loaded guns and canons, and as the Dark Phoenix rose, killing numerous members of the Brotherhood, including most of the Omega Gang. Magneto himself was depowered, but it was believed that his abilities were slowly coming back.

The Decimation was caused by the Human Coalition's actions after Albany, New York,'s destruction by the Phoenix. The mass production of Exonims and the intensive track of mutants and possible X-Gene carriers grandly diminished the mutant population.

At the end of the House of M, the Scarlet Witch pronounced the words "No more humans", turning every human except for barely ten percent of them into monsters, powered beings or not.

The only seen example is Captain America, who was turned into a Deathlok and seems to put in application the "No more humans", in killing every normal humans he could.