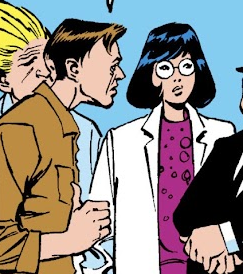 The members of M-Squad were simply regular scientists studying the Empire State Building during the event known as Inferno, when they and their equipment were absorbed into the building.[1] After Inferno, they emerged with strangely changed equipment that they decided to use to hunt mutants. Their first and only job was hunting the mutant Jubilee, which ended in complete failure when some of the X-Men intervened.[2] What became of M-Squad afterward is unrevealed.

Retrieved from "https://marvel.fandom.com/wiki/M-Squad_(Earth-616)?oldid=5634138"
Community content is available under CC-BY-SA unless otherwise noted.