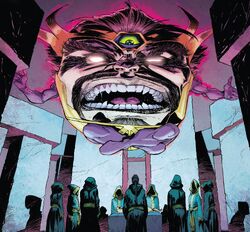 Aware of the true nature of Warp World and fearing for its safety due to the looming threat of Devondra, M.O.R.D.OC. and his cult attempted to summon Satan for help in saving the world.

Their ritual instead accidentally pulled the long-lost Soldier Supreme from the Dark Dimension. M.O.R.D.OC. attacked Soldier Supreme, for which the recently-arrived sorcerer defeated him and his cultists, whom Soldier Supreme ordered to flee and leave their lifestyle behind, while M.O.R.D.OC. escape to another dimension.[1]

Retrieved from "https://marvel.fandom.com/wiki/M.O.R.D.OC.%27s_Cult_(Warp_World)_(Earth-616)?oldid=5021553"
Community content is available under CC-BY-SA unless otherwise noted.