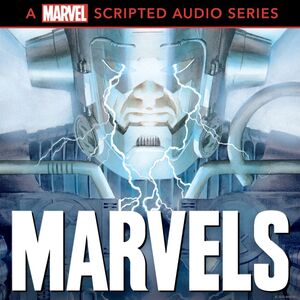 Marcia, Phil and Ben catch up with Ben Grimm (The Thing) and get a first-hand account of the Fantastic Four’s clash with Galactus from a member of the super team. Starring AnnaSophia Robb as Marcia Hardesty; Seth Barrish as Phil Sheldon; Method Man as Ben Urich; Jake Hart as Ben Grimm; Juliet Brett as Alicia Masters.

Like this? Let us know!
Retrieved from "https://marvel.fandom.com/wiki/MARVELS_Season_1_4?oldid=6497502"
Community content is available under CC-BY-SA unless otherwise noted.