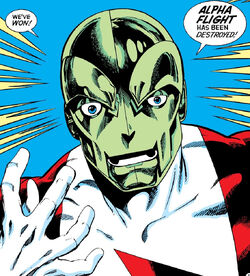 Delphine Courtney was actually a robot MX39147, a highly advanced creation of the Brand Corporation, a subsidiary of Roxxon Oil. She was assigned to Roxxon's executive vice-president Jerome Jaxon as his assistant, though Jaxon did not know Courtney was not human.[4]

Jaxon held a grudge against the Canadian superhero team Alpha Flight and its leader James MacDonald Hudson, and on Jaxon's behalf, Courtney recruited a team of Alpha Flight's former trainees as Omega Flight to oppose them.[2]

Jaxon lured Hudson to New York, where he had Omega Flight make their move against him and his team. Meanwhile, Courtney kidnapped Hudson's wife Heather and held her hostage while Omega Flight fought Alpha Flight. When Heather fought back, she scratched Courtney's face and to her shock, revealed the robotic form underneath. Although Omega Flight were defeated, Courtney escaped.[5]

Courtney rebuilt herself into a male humanoid form and created a duplicate of Guardian's battlesuit. Wearing fake skin and hair that disguised her as James McDonald Hudson, Courtney convinced Heather and the rest of Alpha Flight that she was Hudson. As Hudson, Courtney set up a trap for Alpha Flight with the surviving members of Omega Flight at the West Edmonton Mall. When Courtney tried to release Smart Alec from Shaman's Medicine Pouch, she inadvertently released out-of-control mystical forces. Omega Flight were confronted by Alpha Flight's ally Madison Jeffries, who destroyed Courtney.[6]

Courtney's Guardian battlesuit was salvaged and later used by Heather Hudson as Vindicator.[7]

Courtney was designed to have the highest level of intelligence her creators could give her, and an open-ended deductive capability its creators likened to intuition.

Delphine's strength was superior to a human woman, enabling her to lift around 1,000 pounds.

Like this? Let us know!
Retrieved from "https://marvel.fandom.com/wiki/MX39147_(Earth-616)?oldid=5465585"
Community content is available under CC-BY-SA unless otherwise noted.