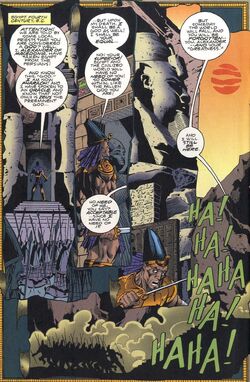 The Macedonian Empire was founded by the ancient Kingdom of Macedonia.[1].

Alexander the Great was born the heir to the King of Macedonia. He became a king himself, establishing a great empire.[2]

Later along with Lord Mormo of the Order of the Hydra, he paid half his treasury to purchase the Spear of Achilles, his ancestor.[3]

In 330 B.C., as Alexander and his armies fought alongside the Nile River to liberate the region from the Persian Empire. This battle was witnessed by the eternal mutant known as Apocalypse, who chastised his people for siding with one conqueror to defeat another, considering it a weakness.[1] Following his victory and conquest of Egypt, Alexander sought to establish himself as a God among the people, as an oracle had stated that Zeus was the preeminent god and that himself would be a god upon his death. Learning that Apocalypse was worshiped as a god as well, Alexander brought an army to the domain of the undying mutant. When Apocalypse heard Alexander's claims of godhood, he merely laughed at the mortal. Such a sinister laugh this was that Alexander the Great and his armies fled.[2] Alexander ruled over Ancient Egypt[4] and Iraq[5] until his death in 323 B.C.[3]

Upon Alexanders death, Mormo of the Order of the Hydra came to the Temple of Athena on the Acropolis of Phaselis, Lycia, taking the Spear and having Lython, a priest who opposed him, killed.[3]

Fall of the Empire

After Alexanders deaths the region fell into war and eventually lead to the rise of the Roman Empire.

Retrieved from "https://marvel.fandom.com/wiki/Macedonian_Empire?oldid=5548535"
Community content is available under CC-BY-SA unless otherwise noted.