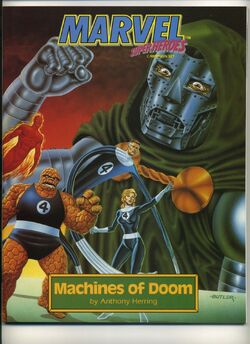 A RPG-based compilation of machines & robots built by Dr. Doom, including information from Earth-616 continuity and extra details (e.g. what ever happened to a machine after one of its appearances). It also includes RPG rules to build and re-program this kind of technology

This book is missing a number of Doom's named devices, even assuming that devices built by alternate Doctor Dooms without Earth-616 counterpart are not to be included. Missing machines include:

This book has a number of typos, including:

Like this? Let us know!
Retrieved from "https://marvel.fandom.com/wiki/Machines_of_Doom?oldid=6478259"
Community content is available under CC-BY-SA unless otherwise noted.