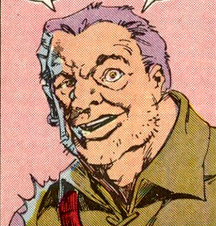 Simeon was recruited by Shapur to help Conan secure Jahli's future as the legitimate heir to the throne of the El Shah Maddoc.[1]

When the child was murdered, he helped Conan fight off Ybn's entire army of assassins.[2]

Joining Conan in his military service on behalf of rebel Prince Irham, Simeon acquired the Staff of the Elder Gods.[3]

Simeon replace Keiv at the guardpost, while Red Sonja's Hyrkanian army was invading the Kothian territory.[4]

Simeon stood by Conan's side, defending the creature from General Freja's reprisal.[5]

As Freja then attempted to put all the Cimmerian's comrades under arrest, Simeon kindly asked Kaleb to rip the general's head from his shoulders.[6]

When the Cimmerian and Kaleb disappeared into a portal in the air, Simeon traveled with the band to the Forest of the Eternal Verities, when, all of a sudden, he was struck by a lightning, and the Staff of the Elder Gods turned into a sword.[7]

Mad Simeon was rotting in a Maddocean prison when Conan arrived. The then-king of that city used Simeon as part of a bizarre trap designed to kill the Cimmerian. The plot failed miserably, and a short time later Conan recruited Simeon as part of his team. Simeon eventually died in Koth, trying to protect Red Sonja from a band of scavengers.[8]

Simeon's body was burned on a funeral pyre and mourned by all of his friends.[9]

Like this? Let us know!
Retrieved from "https://marvel.fandom.com/wiki/Mad_Simeon_(Earth-616)?oldid=4284425"
Community content is available under CC-BY-SA unless otherwise noted.