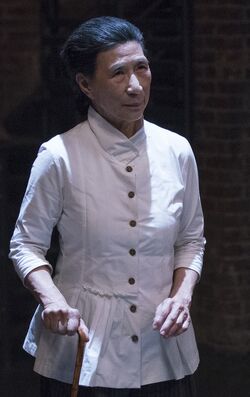 Man cannot be both savior and oppressor... Light and shadow. One has to be sacrificed for the other. Choose... And choose wisely. Or others shall choose for you.

Madame Gao was a drug dealer active in Hell's Kitchen, and allied with Wilson Fisk.[1]

After Fisk started dating Vanessa Marianna, Madame Gao and Leland Owlsley feared the risks presented by Fisk's new emotional ties. The two allied and hatched a plan to try to kill Vanessa by poisoning some of the drinks at a charity party Fisk was attending.

Soon after Madame Gao's heroin production warehouse was destroyed by the so-called "Devil of Hell's Kitchen," she withdrew from the scene and vanished to parts unknown.[2]

Gao later became a person of interest to Daniel Rand when the young man returned to New York after many years absence and took an interest in Rand Enterprises, his father's old company. Gao had been managing a synthetic heroin operation from within the company, making use of a largely unknown thirteenth floor in the Rand building from which to control this operation.[3]

Gao was later caught and brought to the dojo of Colleen Wing where she was interrogated by Wing, Rand, and Claire Temple. Her refusal to give up information prompted Claire to suggest using sodium pentothal, but even this proved to be a fruitless exercise when Gao only pretended to be affected by it once injected. Shortly thereafter, Gao's interrogators discovered that Colleen had been poisoned from a cut she had received while tracking Gao in China, which prompted Gao to offer an antidote if the trio let her go. They didn't get the opportunity to explore this option very far as Gao's men attacked in a bid to extract her from her captivity, but there efforts were unsuccessful.

The trio resorted to contacting Colleen's old sensei Bakuto instead, and once he arrived and instructed Daniel how to use his chi to save Colleen, they took Gao with them to Bakuto's compound to secure her there. Rand's suspicions drew him to Gao's cell, where she mockingly pointed out that not everything around him was as it seemed. SHe also made the claim that Bakuto was leading another faction of the hand which had duped many to unwittingly enter its ranks. This had Danny leave to confront Bakuto over this new allegation, leading to a complete falling out between them and resulting in a near complete evacuation of the compound and leaving Gao to sit forgotten and alone.

Danny and Colleen eventually returned to the deserted facility and spoke to Gao through an intercom. When Rand spoke of how she had been left behind while everyone else fled, she simply claimed that she had suffered far worse, and that she could have escaped but had not wanted to miss Danny's arrival. Danny demanded access to all the information that was on the tablet he had stolen weeks prior, but Gao told him that she had purged all the data from her computers and that there is no copy left. The pair then entered the cell, but still Gao continued to fend off their attempts to interrogate her. Instead she gradually twisted the conversation to her advantage until she brought Danny around to the revelation that it had been Harold Meachum who had been responsible for his parents deaths, and not Gao as he had earlier presumed. Gao then told Danny about Harold approaching her for poison, and then claimed that Danny could only become the true Iron Fist after killing Harold Meachum. Danny furiously exited the cell with Colleen, but before they closed the door, Colleen stopped to tell her to hope that her minions found her before she rots. Gao simply replied that there was no way of locking the truth.

Some time later as Joy Meachum and Davos sat in a cafe and discussed the removal of Danny Rand, Gao eavesdropped on their conversation from a nearby table and smiled to herself.[4]

Like this? Let us know!
Retrieved from "https://marvel.fandom.com/wiki/Madame_Gao_(Earth-199999)?oldid=6126283"
Community content is available under CC-BY-SA unless otherwise noted.