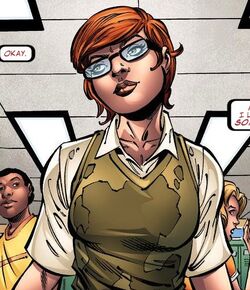 I know my powers will kill me... if I live that long.

Maddy's powers first occurred after an embarrassing incident at her high school. Norman Osborn later asked her to join the Initiative. Maddy agreed, not knowing Osborn's evil intentions, and signed up.[1]

After months of experimenting, they managed to duplicate the event that turned Maddy to gas though the experimentation was very traumatic to her. After Osborn was taken down, Hank Pym took up her case and determined the limits of her powers and the effects of Osborn's experimentation. Because Osborn forced her body to undergo such drastic changes before she was ready she was slowly dissipating and would one day completely disappear.[1]

Maddy is then recruited to join the newly formed Avengers Academy alongside other young potential heroes Mettle (Ken Mack), Striker (Brandon Sharpe), Finesse (Jeanne Foucault), Reptil (Humberto Lopez) and Hazmat (Jennifer Takeda). As soon as Maddy, now calling herself Veil, is dressed in her new costume, she walks in on trainees Reptil and Mettle. She panics upon seeing the latter's face and dissipates, before reforming herself. She is then properly introduced to her other classmates, Finesse and Striker. She, and the rest of the class were lead to believe they were among those most likely to become heroes, but they quickly uncovered files on them revealed they were most likely to become villains. [1]

In Washington, D.C., the Avengers Academy students are busy evacuating civilians through the dimensional doors. Veil notices one girl standing idly by and pushes her out of the way of falling rubble. Veil survives by turning into gas. She then approaches the girl, asking where her mother is. When pointed in the right direction, Veil goes searching beneath the debris and finds the girl's mother and revives her. But as soon as she frees her from the rubble, the mother is shot down by the Thule Society mechs. Enraged, Veil turns into gaseous form and kills the drivers. She then turns to an approaching medic, advising him to take care of the girl. Veil then reflects on her failure to save the mother. [2]

When the Worthy attack the Infinite Avengers Mansion, Veil is knocked unconscious along with Mettle and Reptil leaving Hazmat, Finesse and Striker to hold off them off. However their instructors arrive and save them just in time. She later tells the team she is quitting because she is fed up living in a war zone and being put in a position where the students are forced to sacrifice their lives. She began working for Jeremy Briggs at Briggs Chemical LLC. [3]

Hazmat gets a call from Briggs, saying he has found a cure. Mettle and Hazmat are also joined by Lightspeed and Striker and Finnesse and X-23. Veil reveals to the students that she's been cured with Alchemist's new invention "Clean Slate". Mettle and Hazmat take the cure, and than Jeremy revealed his true intentions: to wipe every superhumans powers off the planet and to regift it only to the people who would use it properly. Jocasta tries to stop him, but Briggs switches her body to a locked office. After defeating the depowered Reptil, White Tiger, Lightspeed, Finnesse, and X-23, Briggs extends his offer to Mettle, Hazmat, Striker, and Veil who accept. [4]

Jeremy Briggs however reveals his true plan to Veil and Striker. He plans to remove all superpowered beings powers only allowing the worthy to possess them. Veil runs to tell Mettle and Hazmat and persuades them to take the so called antidote and restore their powers for good. Mettle and the group confronts Jeremy and his accomplice the Enchantress (Sylvie Lushton) on the rooftop of the building.[5]

White Tiger and Reptil draw on the full power of their magic, gain an extreme upper hand on the Enchantress. Sensing the her defeat she teleports away but not before getting her face slashed by White Tiger.[6]X-23 does some slicing and dicing of Briggs, so releases an acid attack on her stomach, destroying it in the process. Finesse notices this as the perfect opportunity to use X-23's hands as weapons. Finesse grabs X-23's wrists, and stabs two of Briggs' most important arteries. As he sits there bleeding to death, he freaks out, and Finesse starts to stop the loss of blood by cutting off the flow. Finesse reminds Briggs about why they were recruited, that they were at risk of being villains. As she says this, she unties the cloth that has been keeping Briggs from bleeding to death, and walks off as he dies.

In the aftermath, Hazmat tells Mettle that killing Briggs was completely worth it, and that she has no remorse.[7]

Now de-powered and without fear of dissipation, Maddy leaves the Avengers Academy, returning to her normal life as a human once again. [7]

(Formerly) Gaseous Form: Veils's body is that of living gas(es). She is mostly invulnerable to physical harm, although she can still be harmed by unconventional attacks.

(Formerly) Her body was slowly losing cohesion so she is living with a ticking time bomb, in the future she will dissipate completely.

Like this? Let us know!
Retrieved from "https://marvel.fandom.com/wiki/Madeline_Berry_(Earth-616)?oldid=5677384"
Community content is available under CC-BY-SA unless otherwise noted.