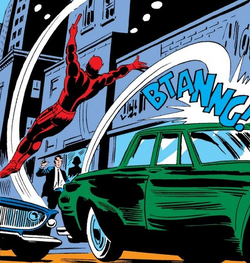 Madison Avenue is the seat of the law offices of Nelson & Murdock.

When his powers apparently faded, Spider-Man was forced to hold on a flagpole over on Madison Avenue; he was spotted by the Fantastic Four, who were passing by on their Fantastic-Car, but they thought he was just clowning around, as usual.[1]

A while later, at the corner of Madison Avenue and 63rd Street, the Human Torch and Pete spotted Spider-Man on a nearby rooftop.[2] Some time later, J. Jonah Jameson sponsored an art exhibit at a plush Madison Avenue art gallery, which was robbed by the Masters of Menace.[3] While Johnny Storm was driving down Madison Avenue, he was contacted by Professor X, who asked him to help the X-Men against the Juggernaut.[4] A short time later, Spider-Man stopped the Molten Man from robbing a jewelry store on Madison Avenue.[5]

One evening, while Mr. Nelson was leaving with Karen Page, he received the visit of Mr. Farnun, the landlord, who asked him to draw up the new leases for the building.[6] For years, the office of Marvel Comics was located on Madison Avenue. While taking a shortcut to reach the office over a building, Daredevil came across Stan Lee, who was looking out the window.[7]

Steve Roger worked as an artist on Captain America for some time, and visited their Madison Avenue location.[8]

Like this? Let us know!
Retrieved from "https://marvel.fandom.com/wiki/Madison_Avenue?oldid=5832587"
Community content is available under CC-BY-SA unless otherwise noted.