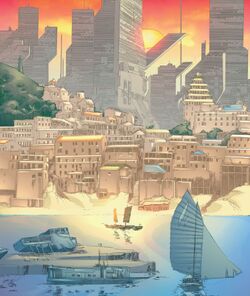 Madripoor, officially the Principality of Madripoor, was an island in Southeast Asia, located in the southern portion of the Strait of Malacca, southwest of Singapore. Its capital and single large city was Madripoor, which was divided between wealthy Hightown and impoverished, crime-ridden Lowtown. This served to represent the extreme social inequality in Madripoor, described as "A place for the very rich and the very poor." Madripoor was once a haven for pirates, a tradition that had somewhat continued to present day with its lawless quality; the Principality did not allow other nations to extradite criminals; however, it was still considered one of the business capitals of the Pacific Rim.

The island was best known because of its relation to the mutant known as Wolverine[1] and the fact that the villainess Viper was a long-time ruler.[2] More recently, it was the focus point of an alien invasion led by Khan, but was stopped by a team of X-Men.[3] Afterward, the newest Scorpion traveled to the island to learn more about her secret past and her mysterious mother.[4]

It was later revealed the island rested on the back of a giant dragon, which was awakened by the Hand.[5]

Madripoor had it's own defenders Tarik Fayad using the Coptic Staff and the alias of "Horus" to protect the small island nation. He was killed by Grant Ward, who was using a counterfeit Iron Man Armor, using intel from the stolen Quantum Drive, which contained information on how to defeat several major super heroes. Horus' death was a demonstration of the legitimacy of the content of the Quantum Drive, meant to attract the attention of any potential bidder.[6]

Magneto later established a variation of the original X-Mansion to serve as a base for the time-displaced X-Men.[7] Since their return to their own time and Magneto's establishment of Krakoa, the mansion's last known residents were the Raksha, a local team of Wolverine-inspired mutant heroes.

The major languages in Madripoor range from English, French, and Filipino.[8]

The monetary unit used in Madripoor is the Madripoor Dollar.[8]

The capital city, which shares the island’s name, lays claim to the most luxurious and expensive hotels in the world. At the same time, it possesses one of the most severe pockets of poverty on the planet. This economic polarization has effectively divided the capital city into two parts: Hightown, the high-tech haven of the very rich and powerful, and Lowtown, the medieval domain of the hopelessly poor.[9]

Hinduism is the primary religion practiced in Madripoor, with its followers believing that, after death, the physical body must be returned to the Pancamahabhuta (the five sacred elements) before their soul can be released to meet the Supreme Being.  As such, elaborate funeral pyres are favored, especially for royalty.[9]  The religious customs also demand that bare legs be covered with sarongs within temple grounds.[9] Davi Naka, Mother Goddess, is one of several gods worshipped by the Madripoorean populace.[10]

The seat of government was originally ruled from Madripoor the capital city. It is governed by an elected Chancellor.[9] It also has a ruling prince as well.[9]

It was conquered by freebooters centuries ago, and its heritage of piracy evolved into the present system of government whose laissez-faire policy allows for virtually any business transaction provided that the status quo is not threatened. Madripoor does not allow criminal extradition from within its borders, making it an exotic diplomatic haven for many international criminals and organizations who help maintain the stability of the government through a sophisticated system of corruption that includes payoffs to the Chancellor, who runs the day-to-day government operations.[9]

In 1942, Madripoor was invaded and occupied by Imperial Japan in order to control the island's trade routes.[11]

In the Humorverse, Madripoor's equivalent is called Nastynpoor (a joke on Nasty 'n' poor), "where nobody seems to notice that a guy has four foot claws coming' out've his hands." Wolverweenie visited it at least once, and an expiring guy gave him the lead to track evil Don Druglordo to Costa Lottamoola.[12]

In the Marvel Anime universe, Madripoor is a central location in season 2.

The island is a hotbed for criminal activity. Multiple gangs inhabit the island, and are constantly at war with each other.[13]. At the start of the season, the island is owned by Hideki Kurohagi, who rules it from the Dragon Palace. Hideki's father, Juo Kurohagi, originally co-ruled the island along with Koh, but was able to seize control of the island after allying himself with Shingen Harada.[14]

Shingen planned to make Madripoor a base of operation for his criminal organization, the Kuzuryu. For this purpose, he wanted to force his daughter Mariko, to marry Hideki.[13]. After Shingen and Hideki left Tokyo and went to Madripoor with Mariko, Logan and his new ally Yukio followed them there.[15]. After meeting Koh and his gang, Wolverine and Yukio helped them reach the Dragon Palace through Hell Road; a road infamous for it's many death traps.[16]

Baron Zemo took Sam Wilson and Bucky Barnes to Madripoor to meet with Selby in order to track down the newly resurfaced Super-Soldier Serum.[17]

Like this? Let us know!
Retrieved from "https://marvel.fandom.com/wiki/Madripoor?oldid=6513523"
Community content is available under CC-BY-SA unless otherwise noted.