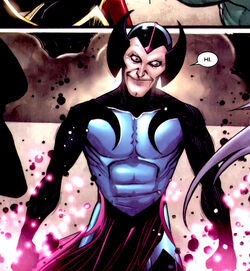 Maelstrom is the son of an Inhuman geneticist and a Deviant woman named Morga, the first known hybrid of these two races of humanity's genetic offshoots. At some point, Maelstrom's mother was put to death for having relations with an outsider and he was thrown into a Deviant Slave Pit for some time before being rescued by his father.[6]

Phaeder and Maelstrom eventually began to travel the world incognito. Maelstrom and his father set up base in the underwater ruins of the island of Attilan when the Inhumans moved their city to the Himalayan Mountains. Discovering molecules of the mutagenic Terrigen Mist in the ruins, the two began experiments that they hoped would let them subjugate the two races that had spurned them, the Inhumans and the Deviants.[5]

The existence of Maelstrom and Phaeder was revealed when Maelstrom attempted to steal the Anti-Terrigen compound developed by Reed Richards (the hero Mr. Fantastic) and the Inhumans. After an unsuccessful attempt to subject all of Attilan to the compound, Maelstrom commanded his accomplice, the mysterious Deathurge, to kill him. At the instant of his death, Maelstrom's life essence and memories were transferred to a cloned body.[5]

While investigating the whereabouts of his mother's people, the Deviants, Maelstrom learned that most of their ruling class had been atomically transmuted into a single organic cube by the Eternals, another variant strain of humanity. Maelstrom decided to use his bio-kinetic power to siphon the energy of the entire Eternal population while they participated in a ritual which formed the Uni-Mind. Thanks to the intervention of the hero team Avengers, this scheme failed, and once more Maelstrom bid Deathurge to terminate his life. Maelstrom's essence transferred to yet another clone and he embarked upon his next master plan, to siphon the kinetic energy of the Earth's rotation. This plan was also thwarted by the Avengers, and Maelstrom was apparently destroyed, as his absorption of the energy forced him to bodily expand, dissolving into cosmic-scale proportions.[7]

In a later scheme, Maelstrom hired Batroc and his Batroc's Brigade in a scheme that saw him opposed by the Great Lakes Avengers. In the process of this event he killed GLA member Dinah Soar, and nearly victorious, he was stopped by Mr. Immortal, who convinced him that if his scheme saw fruition and all life was wiped out in the process, Maelstrom would have no reason to live anymore. Entering into a suicide pact with the villain, Mr. Immortal shot himself in the head, followed by Maelstrom shortly after. While Mr. Immortal's powers saw him revived moments later, Maelstrom stayed dead.[9]

Maelstrom was later instrumental in a plot of Oblivion's that saw him empower Phyla-Vell as the emissary of Oblivion, Martyr, promising to revive Moondragon in return for her service.[10] Maelstrom later removed the power from Phyla as she went to a cocoon supposedly containing Adam Warlock. Phyla believed that by freeing Warlock, the creation of the Magus would be prevented, and her debt to Oblivion would be paid. In reality, the cocoon contained a resurrected Thanos, and Phyla too late realized that Maelstrom had tricked her.[11]

As an Inhuman/Deviant hybrid, Maelstrom possess specific characteristics, including the traditional attributes:[4]

Superhuman Strength: Maelstrom has slight superhuman strength, and is able to lift/press approximately 1-ton strength, due to his unique Inhuman/Deviant heritage.[4]

Enhanced Durability: As an Inhuman, he is twice as durable as a human.[4]

Enhanced Longevity: As an Inhuman, he is twice as long-lived as a human.[4]

Additionally and thanks to the Terrigenesis,[4][5] Maelstrom posses the following abilities:

Kinetic Energy Absorption: Maelstrom can absorb kinetic energy such as physical blows to himself and convert the energy into increased health and strength. He can divert absorbed energy into blasts of kinetic energy as well. Even before he used siphon devices to augment this power, Maelstrom proved able to absorb massive amounts of energy, from blows of the mightiest of Earth's champions.

With his siphon devices, the upper limits of his absorption raised exponentially. The first siphon converted the mental energies of the Eternals' Uni-Mind into a form he could absorb. The second device absorbed kinetic energy from the earth itself, slowing the planet's rotation.

When he became the cosmic entity known as Anomaly, Maelstrom could absorb the motion of the entire universe.

While on Earth, Maelstrom created clones of himself, his minions, and probably others. When one of them happened to be killed, the technology in Maelstrom's lair shunted the life form to a new body. The transfer had a planetary range (4000+ miles) and gave Maelstrom virtual immortality, dependent only on the number of clones he had available.

Cosmic Awareness: After learning the secret from Eon, Maelstrom was able to achieve the cosmic awareness.[12]

Maelstrom isn't immune to his own powers as he was able to kill himself with a kinetic blast from his hand.[14]

While a Deviant/Inhuman hybrid, he presented himself as being genetically related to the Eternals, Inhumans and Humans,[15] to be the "spawn [...] of Inhuman and Deviant",[3] "being both an inferior Eternal and an Inhuman freak".[14]

Like this? Let us know!
Retrieved from "https://marvel.fandom.com/wiki/Maelstrom_(Earth-616)?oldid=5508351"
Community content is available under CC-BY-SA unless otherwise noted.