We don't need divergent opinions. That's what gets people killed. Free will was a nice idea. It tried and it failed. Pax will rule over all.

At the ruins of Hartford, Connecticut, a group of armed survivors called the Stalkers are anxiously awaiting retaliation from the Maestro for having refused to submit to his rule after they sent his emissary's head back to him. The Maestro made his displeasure clear to them by personally leading his Dogs of War to Hartford and slaughtering everyone except for some surviving children. Maestro attempt to coax the Stalkers' children to be taken under his care than what their parents did for them. But the children defiantly refuses his offer as they are upset at him for killing their parents, and one child spit on the Maestro's face. The Maestro then dispassionately orders his men to violently dispose of the children.

Upon his return to Dystopia, the Maestro confide with The Minister of his successful elimination of the Stalkers but to him it was not enough. He knows that there are other groups out in the world who dream of something else, and those dreams will lead to disaster no different from how human dreams have left humanity in ruins. Thus, he declares his far reaching goal of eliminating the remaining division in humanity and replacing it with a single overlord, all living under the Maestro's rule. He calls his new movement: Post-Apocalyptic Existence, or PAX—named after the Latin word for "peace"—for short. Humans are given the choice to swear loyalty to the Maestro or be disposed of. The Maestro begins his campaign by extending his offer to the settlement of Haven led by Machine Man.

Upon meeting Maestro face-to-face, Machine Man releases The Minister and The Maestro orders his underlings to escort his advisor out to the surface while he battles Aaron by himself. Despite Machine Man putting up a fight through his gadgetry and tricks, he is defeated by The Maestro's brute strength. The Maestro finish off Machine Man by tearing his head off. Though he has won, Machine Man's decapitated head tells Maestro that their fight was just to delay him. The Machine Man who Maestro had been fighting was a duplicate while Aaron's real body was safely escorting his survivors out of Haven by airplane and are heading to a backup base where the Maestro will never find them. And as a final warning, Machine Man's duplicate has a bomb built in its body to ensure no one can make use of it. The duplicate explodes and completely leveling Haven. Maestro emerges out of the rubbles and bitterly tells The Minster and his soldiers not to speak a word about this.

Meanwhile, the Pantheon, who have been isolating themselves from the post-apocalyptic world underneath the Columbia Icefield, are inform by Delphi about the actions of their former comrade The Hulk/Maestro. Ulysses and Hector are willing to stop the Maestro, but their proposal are shot down by their cynical leader Atalanta. She sternly orders the Pantheon to stay out of it as their group's responsibility of saving the world had long died out. Later, the Pantheon are surprised to find Doctor Doom standing outside of their sanctuary, and he demands to be let inside.

PETER DAVID AND THE MAESTRO RETURN IN A BRAND-NEW SERIES!

The man once known as the Hulk is now neither man, nor Hulk — call him only THE MAESTRO! After deposing Dystopia’s ancient ruler, the Maestro sets his sights even bigger. It’s time the entire planet Earth recognized their one true god! But the Maestro isn’t the only immortal left…and if he wants to truly dominate the planet, he’ll have to face the most powerful beings in creation! PETER DAVID continues the tale that began decades ago in the legendary Future Imperfect! 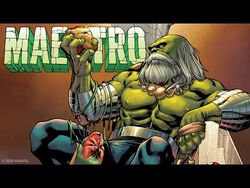