Marvel Database
Register
Don't have an account?
Sign In
Advertisement
in: Symphony in a Gamma Key, Comics, Maestro Vol 1,
and 102 more
English

View source
watch 01:36
We're Getting Mutants in the MCU - The Loop
Do you like this video?
Play Sound
Part of the Symphony in a Gamma Key arc

The fact is, you can't save a world that's determined to destroy itself.

Appearing in "Symphony in a Gamma Key - Part One: Overture"

Synopsis for "Symphony in a Gamma Key - Part One: Overture"

THE STORY YOU’VE WAITED DECADES FOR: THE ORIGIN OF MAESTRO!

Almost 30 years after the landmark story Future Imperfect, legendary INCREDIBLE HULK scribe Peter David returns to the far-future version of the Hulk known as Maestro — the master of what remains of the world. With astounding art from HULK veteran Dale Keown and up-and-comer Germán Peralta, Maestro will answer questions that have haunted Hulk fans for years — and inspire some new ones. How did the world fall and the Maestro rise? What happened to the world’s heroes in between? And where is the Hulk we know and love? Find out here! 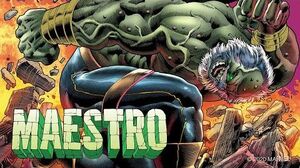