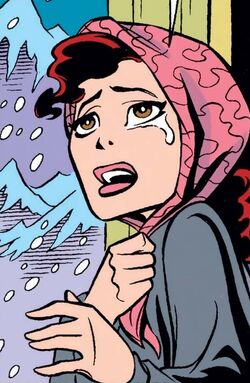 While working as a cleaner for a school in Nuremberg, Germany with her mother, Anya during the 1930s, young Max Eisenhardt, later known as Magneto, became attracted to Magda. Max did things, such as creating necklaces and excelling in sporting events, to gain her attention.[2] In 1936 Magda and her mother were deported into Marzahn Detention camp because of their Romani ancestry.[3]

In 1944 Max, who had joined the Sonderkommando at Auschwitz, Poland, discovered Magda in the Romani camp.[4] Henceforward he pledged to fight to keep her alive. Once he managed to get Magda out of the Auschwitz camp to the KZ Buchenwald when he heard that the Nazi camp guards wanted to liquidate the Romani family camp. In this way, Max saved her from the Zigeunernacht.[5]

When the Sonderkommando squads planned to rise up against the camp guards in October 7, 1944, Max received information that Magda had returned to the old Romani camp. Once more he tried to get her out of the camp by hiding her in a corpse pile which came to the Sonderkommando for burning. After he found her, Max hid Magda in his bungalow with his squad that was not pleased to hide the girl, but he defended her against his mates. When the revolt started,[5] Max and Magda escaped from the death camp.[6]

For several years, Max and Magda lived in a Carpathian Mountain village, and eventually they were married. Magda soon gave birth to their daughter, Anya Eisenhardt.[6] Max sought out a forger, named Georg Odekirk, who was supposed to be among the best, and asked him to create a new identity for him and his family. Odekirk fabricated the existence of "Erik Lehnsherr, the Sinte gypsy," so that Max could live more easily among Magda's own people.[7] Not satisfied with the simple life of a mountain village, Erik moved his family to the, Soviet city of Vinnitsa so he could better himself.[8][6]

When a fire broke out in the inn that Magda and her family were staying in, Anya was trapped on the upper floors and a mob of people prevented Erik from rescuing her. Enraged, Erik's powers manifested uncontrollably, killing the men holding him, the crowd watching, and a large section of the city of Vinnitsa. Traumatized by both her daughter's death and Erik's new powers, Magda fled from him. After allegedly giving birth to the twins, Pietro and Wanda Maximoff, under the care of Bova Ayrshire on Wundagore Mountain, Magda fled into the wilderness, angry and scared, and soon was believed perished in the cold;[8] however, as it has since been established that Magda was not the birth mother of Pietro and Wanda, this statement appears to have been somewhat embellished.[9]

Like this? Let us know!
Retrieved from "https://marvel.fandom.com/wiki/Magda_Eisenhardt_(Earth-616)?oldid=6130796"
Community content is available under CC-BY-SA unless otherwise noted.