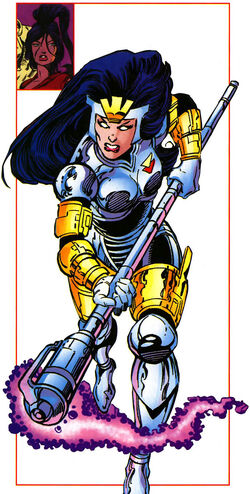 Magdalene served on her world's Avengers until the team was destroyed through the manipulations of Proctor. She felt a strong attraction to her savior, unaware he had caused her world's Sersi to go insane.[2][3]

However, when their next mission ended with Swordsman joining, she soon fell in love with him instead.[2]

When the Gatherers arrived on Earth-616, Magdalene's counterpart Marissa Darrow was murdered and 'gathered' by Proctor.[4] As Javert began to lose trust in Proctor, so did Magdalene. She eventually left the Gatherers with Swordsman and became an associate member of the Avengers.[5]

She and Javert assisted the Avengers on missions although they still felt they did not belong on this world. They declined Avengers membership and sought to find a new home for themselves. With the assistance of Iron Man, Magdalene used her lance to open a portal to a new dimension; both left and sought to make a new life for themselves.[6]

Magdalene is a formidable hand-to-hand combatant, and is skilled in using melee weapons like her lance.[2]

Magdalene possesses superhuman strength, enabling her to lift around 75 tons.[7]

Magdalene is outfitted in a suit of armor that makes her highly resistant to injury.

Like this? Let us know!
Retrieved from "https://marvel.fandom.com/wiki/Magdalene_(Earth-9201)?oldid=5839878"
Community content is available under CC-BY-SA unless otherwise noted.