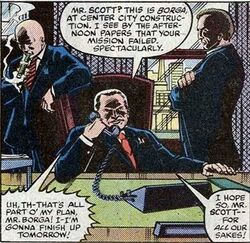 The Maggia was an international crime syndicate that originated in southern Europe (mostly Italy), which expanded throughout Europe and the Americas. Unlike other prominent criminal organizations (e.g. Hydra and AIM), the Maggia were not involved with any subversive activities. In the United States they eventually ended up controlling most of the nation's loan-sharking, illegal gambling, and narcotics. Protection rackets and prostitution were also very important to the Maggia.[8][9]

The Maggia were not a monolithic organization, instead it has consisted of many "families", all of which are independent of each other. They usually didn't cooperate much less coordinate with each other, though they normally agreed not to interfere with each other.[10] Within the Maggia, bloodlines were usually valued more than brains.[11] In Europe, the most powerful Maggia leaders were members of the "Commission".[8] Internationally, a few Maggia chieftains have risen to dominance over the other Maggia families. Count Nefaria was for a time the leader of the European Maggia, and perhaps of all the Maggia.[12][13] The Afro-Caribbean Bushmaster later became the head of the European Maggia.[14] The American Maggia has not yet had anyone unite the families in the Western Hemisphere.

A few Maggia families have recruited or hired superhuman agents, usually the Nefaria family. Within the New York area were several Maggia families, the most prominent ones being the Manfredi and Hammerhead families. The Maggia has partnered or allied with other criminal groups, such as that of Boss Morgan in Harlem. The Maggia or individual families within it have also gone to war with various criminal organizations, including both rival crime syndicates (e.g. Kingpin's organization and Mister Negative's Inner Demons) and subversive organizations (e.g. Hydra and A.I.M.).[15][16][17]

The Maggia have had their share of clashes with vigilantes and the super-powered community. The Nefaria Family has had confrontations with both the X-Men and the Avengers, and especially Iron Man. In New York City, both the Manfredi Family and Hammerhead Family have had dealings with the street-level costumes of the city (e.g. Spider-Man, Daredevil, Cloak, and Dagger) as well as the vigilante, Punisher. The Bushmaster clashed repeatedly with Iron Fist and Luke Cage, and on occasion several Maggia groups have had dealings with S.H.I.E.L.D..

Like this? Let us know!
Retrieved from "https://marvel.fandom.com/wiki/Maggia_(Earth-616)?oldid=6442998"
Community content is available under CC-BY-SA unless otherwise noted.