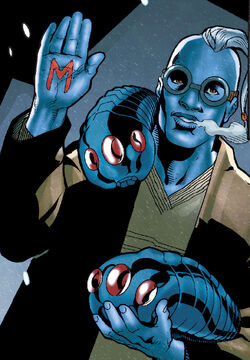 Born to a family of five siblings, young Japheth never quite grew at the normal rate of his other siblings. He suffered from terrible stomach pains and required a special food. Told by doctors his terrible stomach pains were caused by cancer, and not wanting to drain his family's finances with medical treatment, young Japheth left his small South African village at twelve to commit suicide. He wound up in the Kalahari Desert only to be found and saved by Magneto, who helped uncover the nature of the boy's malady: two slug-like creatures that dwelt within his guts that were the boy's digestive system.[1]

Magneto extracted the slugs and brought Japheth back home, but found Japheth's father had been killed by rebel fighters, the Afrikaners. Asked to help, Magneto slaughtered the rebels in retaliation with Japheth by his side, but the boy was horrified and said he would never join Magneto's cause. Magneto grew angry, but told Japheth he would one day change his mind.[1]

Little is known of what Maggott did in the following years, but at some point he decided to search out Magneto, to attempt to have Magneto help him master his powers. Maggott's slugs, Eany and Meany, had to burrow their way in and out of his stomach each time, causing immense pain. They also feasted up to five times daily, and the physical and mental toll was becoming too much for the young man.[1][2]

Using his psychometric powers - which allowed him to read "memories" of a specific area - Maggott finally believed he traced Magneto's signature down to New York City -- but found Psylocke and Archangel instead. After a brief showdown, they were all suddenly teleported away to Antarctica and put on the jury at the Trial of Gambit with other various X-Men. At this location, Maggott finally met with Joseph who, at the time, was believed to be the real Magneto. He finally was able to express his gratitude to the man for saving his life as a child.[3]

Maggott followed the team back to the mansion where they found Cyclops undergoing surgery to remove a bomb within his chest. When the bomb was removed, however, it was still going to detonate, and the team panicked. One of Maggott's slugs gulped down the device, where it detonated in its belly - but caused no more reaction than a fiery burp. Maggott was asked to join the X-Men on a full-time basis.[4]

He would often keep to himself, due to his bizarre eating habits, which made the rest of the team suspicious. While flirting with all the girls at Xavier's - Cecilia Reyes in particular - Maggott feared the others would be repulsed by the true nature of his power.[5]

Shortly after his arrival, several humans were murdered (nearly devoured, in fact) in Salem Center. The suspect appeared to be Eany and Meany on a rampage - but, after a botched attempt on Wolverine's life, the culprit was revealed to be a group of Ru'Tai demons lead by a creature called Pilgrimm. They bore an uncanny resemblance to the slugs. The team luckily defeated the demons and Maggott was prompted to finally reveal his history to Wolverine. The two began to bond, with Wolverine keeping his secrets (including his true age), but this bonding time was cut short by a threat from the Shadow King in Africa.[6]

After returning to the mansion, Beast believed it would be best for Maggott to further explore his mutant abilities at the Massachusetts Academy with Generation X.[7] He agreed and transferred to the school, but his schooling was again cut short by another threat. This time it came in the form of a big game hunter in search of Maggott's slugs. The Generation X team helped defend Maggott and the slugs from the hunter, but the man escaped. Feeling distraught after having brought danger to his new teammates, Maggott decided to pursue the hunter, and was not heard from again for some time.[8]

Maggott briefly returned to Xavier's school for the funeral of Joseph.[9]

At some point during his further travels, Maggott was captured by Weapon X. Sadly, he was one of the first to be executed at Neverland, the mutant internment camp. Before he was killed, he gave one of his slugs to two children in the camp, so a piece of him would survive.[10] Unfortunately, the children and the slug were "escaped" by "Doctor Windsor" (truly Mister Sinister, master of cloning), and the slug is now being held by the mutant scientist.[11]

Maggott was later revived using magic and the techno-organic virus to aid in Selene's assault on Utopia.[12]

Additionally, reality had shifted significantly around the X-Men.[citation needed]

He appeared to attend Cyclops' speech at Washington, D.C. about the peaceful Mutant Revolution.[13]

Japheth was further confirmed to be alive when he and one of his slugs attended the first meeting of the Mindfulness of Mutant Appearances, a support group set up by Domino and Nightcrawler for mutants unable to pass as normal humans.[14]

Japheth (or a cosplaying look-alike) appeared waiting in line for the X-Men-themed 17th birthday party of Quentin Quire at the Hellfire Club in New York City. The party bouncers postulated that this was the real Japheth, stating offhand "...who would dress up like Maggott?" (a dig at Maggott's lack of popularity as a X-Man).[15]

Japheth was made to vanish along with the X-Men by Nate Grey after they confronted him for trying to impose his vision on the world.[16]

Japheth and the others were sent to Nate Grey's new reality where Nate attempted to create a utopia where mutants live in peace. Everyone transported there had their memories of their previous lives erased.[17]

Brother Japheth became a member of a group of mutants who followed En Sabah Nur who, along with Anole, Transonic, Match, and Scripture were engaged in plan to set off an explosion at the Hope Summers Memorial Library in order to end the fake memories that had plagued them.[18]

While not seen, he was later allowed by Nate Grey to return to the real world after Nate realized the flaws of his reality.[19]

Sentient Digestive System: Maggott's digestive system consisted of two enormous sentient techno-organic slug-like creatures, nicknamed Eany and Meany. Whilst Maggott himself could not eat, his slugs could devour any form of matter with incredible speed. When they finished feeding, they returned to his abdomen and imparted the energy from the matter they absorbed into Maggott’s body. This energy nourished Maggott, temporarily granting him enhanced strength and durability, as well as turning his skin blue.[20]

Maggott's slugs could act autonomously from him and appeared to be highly intelligent. They communicated with him via a telepathic rapport, and were extremely sensitive to magic.[21]

Because the slugs functioned as Maggott's digestive system, he could not intake nourishment without them, and would die if separated from them indefinitely.[1]

Like this? Let us know!
Retrieved from "https://marvel.fandom.com/wiki/Maggott_(Japheth)_(Earth-616)?oldid=5751563"
Community content is available under CC-BY-SA unless otherwise noted.