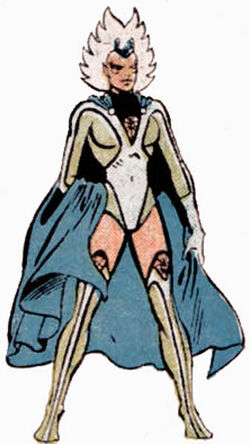 Magique is a member of the Imperial Guard of the Shi'ar Empire. She fought against the X-Men when they went into space to rescue Princess Lilandra from her evil brother D'Ken.[1]

She was there when Deathbird was empress and got into a spat with Excalibur over what to do about Rachel Summers, who was the Phoenix Force host at the time.[2]

Magique's biggest moment was when Empress Lilandra ordered some Guardsmen to get the Nega-Bands to help the war effort against the Kree. Magique went head to head with Quasar and used her illusions to make the Shi'ar strike team look bigger than it actually was, but then got knocked out by Doctor Minerva and her illusions fell apart.[3]

During the next Kree/Shi'ar War, Magique was hunting the quantum mage Adam Warlock on behalf of the Imperial Guard after he assaulted the fleet. She placed a "witch-mark" on him, letting her track Warlock wherever he went, even Knowhere. Magique cast the "witch-mark" so that Shi'ar troopers could fire at Adam without missing, but Adam used his powers to manipulate the mark, moving it to Magique's body. The troopers' weapons fire was then guided to her, and Magique was seemingly killed.[4]

Magic: 3D illusions of no substance but incredible (or in this case perfectly credible) accuracy.

Her powers are apparently magic in nature.[5]

Like this? Let us know!
Retrieved from "https://marvel.fandom.com/wiki/Magique_(Earth-616)?oldid=5722504"
Community content is available under CC-BY-SA unless otherwise noted.