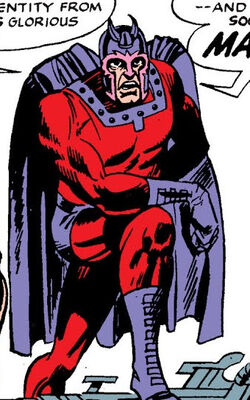 This android version of Magneto approached Mesmero and asked him to hypnotize Lorna Dane into believing that she was Magneto's daughter. Mesmero was in the middle of doing so when the X-Men intervened and ruined "Magneto’s" plan.[1] A Sentinel attack would later reveal that the Magneto who had initially approached Mesmero was actually a robot, created by the Machinesmith.[2]

The Magneto robot -- either the reassembled remains of the original or a reconstruction -- was later seen on a worktable while the Machinesmith witnessed Captain America's confrontation with another of his robot duplicates, that of Baron Strucker.[3] Some time later, the Machinesmith activated the Magneto robot when his then-employer, the Red Skull, was kidnapped by the actual Magneto during the Acts of Vengeance. Hoping to draw the mutant terrorist out, he and the Skull's enforcer Crossbones sent the duplicate to attack an anti-Mutant Registration Act demonstration being held by the Resistants. The attack was interrupted by Captain America, and after a short fight the Magneto android was again destroyed when a kick to its head decapitated it.[4]

Following the events of M-Day, which cost him his powers, Mesmero would recall the deception of the Magneto robot will reminiscing about some of the low points in his life. [5]

Like this? Let us know!
Retrieved from "https://marvel.fandom.com/wiki/Magneto_(Machinesmith_Android)_(Earth-616)?oldid=5679574"
Community content is available under CC-BY-SA unless otherwise noted.