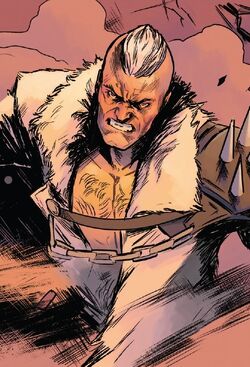 Mahkizmo the Nuclear Man is the strong and chauvinistic ruler and leader of Machus, a future alternate reality Earth circa the year 2200 AD, where men rule society and enslave women. A world where male dominance and superiority is preached and permeates through society. As a parallel world and reality, the world of Femizonia held and existed almost in opposite to the world of Machus. On this planet of Femizonia, it is the woman who hold superiority and power over the men, where the men are the second class citizens. At some point the two worlds became aware of each other and war was the consequence. Not only that, but men on the female dominated world of Femizonia begun an uprising, inspired by their males from Machus, and the females on Machus were likewise inspired by the society on Femizonia, and both societies had to deal with war and conflict from within as well as externally. A champion of the Femizons, Thundra had been sent back in time, hoping to strike a strategic blow, by humbling man earlier, finding the strongest and greatest man of history and having Thundra defeat him, eliminating the possibility for such a world or society as Machus ever coming to be. The leaders of Machus learning of the Femizons plans, likewise sending Mahkizmo back in time to prevent this and stop Thundra.[1]

Mahkizmo arrived in the modern era of Earth-616, on his hunt for Thundra, and faced off against her sometime allies the Fantastic Four, soundly dealing with the Thing, Human Torch, and Mister Fantastic. In confrontation with Thundra he teleported the female warrior away to his home planet of Machus, and imprisoned her against her will.[1] The Fantastic Four had decided to follow both time displaced warriors however and the appeared on the world of men, Machus using a time machine appropriated from Doctor Doom. Except again, Mahkizmo and now his fellow warriors on Machus defeat the Fantastic Four yet again, with Mahkizmo even claiming then Fantastic Four member Medusa as a prize. The cunning Medusa managed to escape his clutches given the relaxed security as opposed to the cells where the other Fantastic Four members were being held.[2] The rest of the team forced to fight in the Machus men built arena. Their powers and strength sapped due to a will bending energy ray, salvation comes with Medusa who had escaped and traveled to the world of the Femizons, Femizonia and recruited a horde of female warriors to provide a necessary distraction and opposition to the men of Machus. Mahkizmo himself prepared to unleash his nuclear punch, but was double teamed by the Thing and Thundra incapacitating him, ending his threat. The resulting blow also merged Femazonia and Machus into a new future world of Earth-7412, where both societies lived in peaceful coexistence. This merger caused the Fantastic Four and Thundra to be shunted back to their native reality.[3]

Mahkizmo somehow survived as a disembodied spirit, a silent witness to this new reality. Growing furious at the gender equality, he sought to change it and managed to merge with the body of one of that era's men, transforming it into his old body.[4] Creating a gender bomb, Mahkizmo concocted a rather foolish plan to travel back in time and unleash this weapon in the past to wipe out all women, and ventured back to Earth-616 in a time machine.[5] Taking a page from Thundra, Mahkizmo sought to humble the modern age's most powerful woman, and clashed with the She-Hulk. Their battle abruptly took a strange turn when Mahkizmo was struck by an arrow fired by the Olympian god Eros, making him fall in love with She-Hulk. He absconded with her to his era, planning to detonate his bomb from there.[6] She was followed by the Thing and her then-boyfriend Wyatt Wingfoot who mounted a rescue mission. During the ensuing battle the presence of the time traveler caused the people of this merged reality to remember their animosity toward each other leading to fights. This was decreed as normal, as in this society it was viewed as typical lovers quarrels. She-Hulk also managed to convince Mahkizmo of the potentially catastrophic repercussions of his plans: In that if he killed all the women in the modern age, it would spell the extinction of the human race and his future would no longer exist as there would be no women left to birth new generations of children. Mahkizmo wisely ended his gender driven schemes and learned to live in his world as it was.[4]

Some time later, Mahkizmo returned to the modern age of Earth-616. He was one of the many Fantastic Four villains who were gathered by the Puppet Master and the Mad Thinker under the pretense that they should all united and defeat their foes together. As anticipated, Mahkizmo and the others refused to work together and left. This all played according to plan, as the Puppet Master and Mad Thinker actually intended to collect their DNA. The Mad Thinker led the Puppet Master to believe that this was to control the various Fantastic Four foes to set against their enemies.[7] However this was all part of a grander scheme by the Mad Thinker, who was planning on last complex plan before going into retirement in the Negative Zone.[8] As the Thinker intended, the Fantastic Four recovered the DNA samples and were tricked into thinking that if the did not deal with all their foes right away, they would all be dead in the next year. Mister Fantastic then set about capturing all these foes and incarcerating them.[7] had been incarcerated in the newly constructed Vault prison located in the Negative Zone, alongside other Fantastic Four foes Dragon Man, Hydro Man, Mad Thinker, Mole Man, Psycho Man, Red Ghost and his Super Apes, among others. A female villain named Threska manages at one point to release them all from their cells, and it falls to the Fantastic Four to stop them all.[7]

Mahkizmo was one of the many foes captured by the Fantastic Four and placed in the new Vault prison within the Negative Zone. Later, the Thinker's co-conspirator Threska assisted in a jail break of the facilities.[9] Mahkizmo and the other villains were fought back by the Fantastic Four, She-Hulk, and Hercules.[8]

Nuclear Man resurfaced years later. As part of a plan of global conquest, he took over Roosevelt Island accompanied by his son, Som.[10] Nuclear Man used Som's power-absorbing abilities that were unknown to the boy to leech off Hazmat, one of the people trapped within the island, and power a barrier that sealed off the area and dilated time inside of it.[11] Nuclear Man trapped all male populace inside a citadel, and built an army of robotic "Metal-Men" to persecute the women, who banded together into a rebellion.[10] Before escaping from the citadel and joining the rebellion, Som suggested Nuclear Man seek out Captain Marvel to subjugate her and bear powerful children with her, secretly hoping that she could instead bring his father's downfall.[12]

With this objective in mind, Nuclear Man lured Captain Marvel inside the barrier,[13] but she joined the rebellion after managing to fend off Mahkizmo.[10] As part of his idea to have Captain Marvel prove herself, Nuclear Man also lured Rogue, another super hero with whom Captain Marvel had a complicated history since Rogue had once used her mutant abilities to steal Carol's powers and memories.[14] When Captain Marvel attempted to infiltrate Nuclear Man's citadel,[12] Nuclear Man used a mind-controlling collar to force Rogue to fight her. Carol and Rogue managed instead to work together and overpower Nuclear Man.[14] In retaliation, he activated Som's powers so the stored energy he leeched would cause an explosion. Before Som could detonate, Captain Marvel had Rogue absorb Som's powers, neutralizing the threat and powering down the barrier. After being bested in combat, Nuclear Man promised to extract revenge and teleported away, taking Som with him against the boy's will.[11]

Mahkizmo is a seasoned and experienced fighter, and a savage brawler.[citation needed]

Like this? Let us know!
Retrieved from "https://marvel.fandom.com/wiki/Mahkizmo_(Earth-74101)?oldid=5755013"
Community content is available under CC-BY-SA unless otherwise noted.