This page merges many beings believed to be the same entity, and could be split in the future depending the publication of new material (Discuss).
Mahu 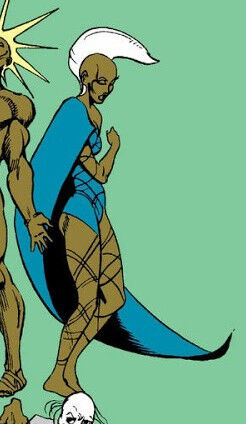 In 1000 AD, the Third Host of the Celestials occurred, during which the aliens informed they would return 1,000 years later to judge Earth's right to continue existing. While the pantheons prepared for war, Gaea planned a peaceful solution to the problem with many goddesses, among them Mahu.

For the next thousand years, they searched for humans representing mankind's highest ideals, to be offered to the Celestials as an offering. The goddesses placed the candidates in suspended animation, with their superhuman potential, the legacy of the First Host, awakened.[4]

In the real world, Yemaya is the Yoruba equivalent of the Orisha Mahu. In the Marvel Universe, it has not been confirmed Mahu and Yemaya are indeed the same goddess.

Like this? Let us know!
Retrieved from "https://marvel.fandom.com/wiki/Mahu_(Earth-616)?oldid=5706296"
Community content is available under CC-BY-SA unless otherwise noted.