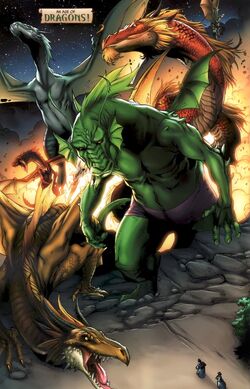 I come from a shape-changing cosmic race known as the Makluan... some call 'Space Dragons'! Our home planet of Kakaranthara was once a peaceful paradise, but a group of us could not accept the tranquility it offered. We left on a quest to find worlds more exciting than our own.

Evolved from a species of reptiloid creatures in the Andromeda Galaxy, Makluans are best known on Earth by their least typical members. Though typically peaceful and noble, a number of Makluans departed their homeworld, Kakaranthara, in search of worlds to conquer. Landing in China, the majority of the crew used their shape-shifting abilities to take on human guise, hoping to infiltrate their society in order to gather reconnaissance before conquering the planet. The navigator, Fin Fang Foom, remained behind as backup, allowing himself to become entombed, and entered into a hibernationary state with the application of a particular herb indigenous to that region. For unknown reasons, his comrades never awakened him.[citation needed]

In one possible timeline, the legendary British kingdom of Camelot was destroyed by attacking dragons. Merlin and the Lady of the Lake sought to prevent its destruction by projecting the mind of the Black Knight forward in time to the 21st century, and into the body of his descendant, Dane Whitman. There he enlisted the help of the recently-reformed superhero team Excalibur. Using the Lady of the Lake's power, the group was transported back in time days before Camelot's destruction. The teams then uncovered the fact that numerous Makluans had slain many of Britains native dragons, and that it was they who attacked Camelot. Excalibur returned to their own time after defeating the invaders.[citation needed]

In the 8th century, Fin Fang Foom awoke, but was eventually put back to sleep through use of the same herbs. He subsequently entered into Chinese legend, and his tomb remained guarded well into the the 20th century. His slumber would be interrupted again several times during that century. He was first awakened by a teenager, Chan Liuchow, who believed the legends of the great dragon, entered his tomb, and tricked him into attacking the nearby communist Chinese before being put back to sleep. He was at some point captured by the Collector, then relocated to Monster Island by the Mole Man before returning yet again to hibernation. The madman Doctor Vault again awakened him to have him attack the Living Colossus. After returning to sleep, he was again awakened when his body was possessed by the demon Aan Taanu.[citation needed]

At some point, the spirit of the Makluan captain, Axonn-Karr, in the form of a human Chen Hsu, guided the man who would become the Mandarin to the Valley of the Sleeping Dragon. There, the Mandarin found the Makluan starship and its trove of advanced technology, including his signature power rings. He also awoke Fin Fang Foom so that he could be used to threaten the Chinese government. Mandarin's scheme was quickly met by Iron Man, but when the remaining dozen other Makluans revealed themselves and finally began their conquest, the Mandarin and Iron Man banded together to destroy these invaders. In light of the events in medieval Britain and modern China, Fin Fang Foom may be the last Makluan on Earth; of course, with their natural shape-shifting abilities and incredibly long lifespans, it is impossible to say for sure.[citation needed]

About 4500 years before The Heroic Age, a group of Makluans crashed landed on Earth. They were initially treated as gods before humans started hunting them for sport. Fin Fang Foom was the last remaining of his species. He was given a particular herb indigenous to that region and subsequently slept for decades. It would later be revealed that Foom was simply the last of his generation, and many groupings on Makluan eggs had hatched on Earth.[3]

Various superhuman attributes, including greater physical strength, stamina and durability on account of more advanced musculature and super-dense scales on the dermis, as well as a longevity far in excess to that of an average Human.[citation needed]

Extraordinary metabolism grants them rapid healing and the ability to regenerate certain of their body parts, entering a hibernationary state to accomplish this, which also influences their extended lifespans.[citation needed]

Makluans are able to survive in the vacuum of space or underwater for extended periods and their wings endow them with flight capabilities under the speed of sound. They also exhibit limited telepathy, but their psychic influence is often more compatible with the minds of other reptiles.[citation needed]

They have natural shape-shifting abilities which allow them to assume a multitude of forms, able to alter not only their physical appearance, but also their size, weight, and mass by many orders of magnitude. It has been observed that individuals are able to transfer their life essence into the body of another living entity in case of death or serious injury; having done so, they are often able to transform the possessed body into their true form via their natural shape-shifting abilities.[citation needed]

They can also exhale a corrosive chemical mist from their mouth, resembling fiery plasma, with varying degrees of intensity and accuracy.[citation needed]

Greater than that of an average Human.[citation needed]

Susceptible to the effects of a leafy herb, indigenous exclusively to China, and known to induce prolonged hibernation in individuals.[citation needed]

Like this? Let us know!
Retrieved from "https://marvel.fandom.com/wiki/Makluans?oldid=6393923"
Community content is available under CC-BY-SA unless otherwise noted.