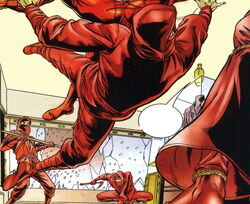 Once we were guided by vengeance, as were you. Wanton violence was our purpose, as was yours. We abandoned that path, as have you. Yet we have found a new purpose, a new destiny. The Makoto live for the harmony of the soul. We offer to share our purpose with you.

The Makoto were a group of dissidents of The Hand who refused to commit suicide with the suicide for failing to eliminate Daredevil and Elektra. Worshipers of Oni-Makoto, they tricked Shi into becoming his host.[1]

She attacked Daredevil, only to partially retake her body. The medallion used to her choked her out and Murdock took her to the Shrine of Saint Jude. After she returned to heroics, Oni-Makoto took her over and tackled Daredevil off a rooftop, knocking them both out. The Makoto took them and started the ritual to complete the possession, only for Daredevil to awaken and disrupt the ceremony. Masao sacrificed himself, allowing Oni-Makoto to take form. Shi awoke and she embraced Oni-Makoto, causing him to disappear.[2]

Retrieved from "https://marvel.fandom.com/wiki/Makoto_(Earth-7642)?oldid=4747483"
Community content is available under CC-BY-SA unless otherwise noted.