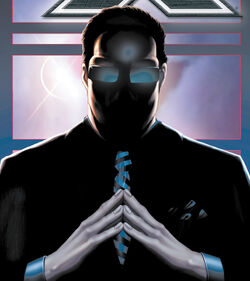 Malcolm Colcord was a U.S. Army Private which was involved with the original Weapon X Program as a security guard to the Department K Facility used as base of operations by the Program.[1][2]

One night, the Weapon X Program subject known as Experiment X escaped from the complex, massacring all the soldiers in his way in a feral rage. Colcord sadly did not escape his wrath, and was repeatedly slashed in the face by the Weapon X, disfiguring him for the rest of his life.[1]

This horrifying moment marked the start of Malcolm's revenge against the mutant population. He became obsessed with mutants and his wife and kids left him, unable to recognize the man they had once loved. He seized control of the Weapon X Program, becoming the cold, ruthless and calculating Director. To his superiors, Colcord presented the idea that mutants were a resource, waiting to be exploited, but inside he desired nothing less than the complete extermination of all mutants. One of his primary roles as Director was recruiting mutants such as Sabretooth, Garrison Kane and Copycat as agents for Weapon X. Colcord also recruited Agent Brent Jackson of S.H.I.E.L.D. as his second-in-command, but later became highly distrustful of Jackson, whose cunning was his most dangerous weapon.[2]

Malcolm hoped to bring Wolverine back to fold, and used implants to control Wolverine and made him murder U.S. Senator Drexel Walsh. The implants were one use only, though and Wolverine regained control. Wolverine and his friend Beast were eventually arrested by Brent Jackson and sent to prison. Colcord had Weapon X agent Sabretooth kidnap Wolverine from prison and taken to the Weapon X Compound, but S.H.I.E.L.D. director Nick Fury didn't trust Jackson and sent the bounty hunter known as the Shiver Man to free Wolverine. They escaped, but Colcord remained in control of Weapon X.[3]

He then tried to recruit Deadpool and while Deadpool initially agreed, he turned on Weapon X when Copycat, his ex-girlfriend became one of their targets. Copycat was killed and Deadpool tried to kill Colcord to avenge her death. He failed and was killed himself (though he was resurrected shortly afterwards).[4]

The failure to recruit Wolverine and the deaths of Deadpool and Copycat lead Colcord to decide to bring in new members. The new line-up consisted of Wild Child, Sauron, Mesmero, Aurora, Marrow, Washout, and Maverick, now known as Agent Zero. Most importantly this line-up was used for rescuing Madison Jeffries of Alpha Flight, who once brainwashed, played an essential role in Colcord's plans.[5]

Colcord sadistically engineered a mutant concentration camp called Neverland, designed and built by Jeffries. Jeffries also designed and built the sentries known as Boxbots, based on his old Box-armor. Using Weapon X agents, mutants were forcibly taken from their homes and imprisoned in Neverland. There they would be separated into two groups: the useful and the useless. Those with useless powers would be disposed of. The survivors would either join the Program, or would suffer painful experiments to extract their powers. Mister Sinister had created an alternate identity as one of the scientists, Dr. Windsor in Neverland and used Neverland to get subjects for his own twisted experiments.[6]

Colcord later fell for the mutant Aurora, who persuaded him to go through facial surgery to lose his bitterness. Colcord agreed, and for a while the couple lived happily together. Of course the Director kept Aurora ignorant of Neverland, and never sent her there during inspections. Unfortunately amidst their love, Brent Jackson pointed out Colcord's hypocrisy, and slyly called him a mutant lover. Colcord, greatly troubled by this name, angrily beat Aurora. Jackson plotted using this moment as a chance to usurp the program from the unsuspecting Colcord. Persuading Sauron, Wild Child, Washout, and members of the Underground to join him, Jackson staged a coup against the Director, and successfully defeated him. Colcord destroyed his face in frustration for losing his incentive, and escaped the battle with the help of Jeffries and Aurora.[7]

Aurora however later returned the favor to Colcord, leaving him and Jeffries stranded in the middle of nowhere. Colcord and Jeffries stayed underground, while Jackson took control of Weapon X. During this time Colcord was haunted by visions of Wolverine. These visions started to talk to Colcord, motivating him and giving him advice. Jeffries was happy to see Colcord motivated again, but was unaware of Colcords hallucinations. Eventually Colcord returned to Weapon X and decided to rebuild the Program with the help of Jeffries.[8]

Colcord was apparently unable to maintain his control over Jeffries, because they were never seen working together again after this. Instead, Colcord entered into an alliance of convenience with Daken, studying the artificial effects of the healing factor on test subjects.[9]

Like this? Let us know!
Retrieved from "https://marvel.fandom.com/wiki/Malcolm_Colcord_(Earth-616)?oldid=6477749"
Community content is available under CC-BY-SA unless otherwise noted.