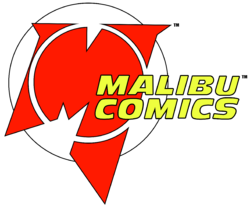 Malibu Comics has a long history prior to its absorption by Marvel Comics, and with it, an extended library of titles and characters. This article specifically focuses on Malibu's history in relation to Marvel Comics, namely those subjects related to the Ultraverse and the Genesis Universe. For more detailed information on the company and its library, please visit the Malibu Comics Wiki.

Malibu Comics was an independent comic book publisher that eventually became an imprint of Marvel Comics.

Formed by Dave Olbrich, Tom Mason and Scott Mitchell Rosenberg in 1986, Malibu Comics proved to be a massive success, at one point in its history surpassing DC Comics in market share, partly from the overwhelming success of the Ultraverse line.

Despite Malibu's success, the company became a victim of the industry-wide sales decline of the mid-90s. Marvel Comics bought out Malibu on November 3, 1994, turning it into an imprint while cancelling a number of on-going series in the process. Marvel eventually brought back a number of the more popular Ultraverse titles under the new Malibu imprint, but ceased all publications with the imprint in 1996.

Malibu had a number of imprint publishers under its umbrella at the time it was acquired by Marvel in 1994. All of these imprints ceased production after the merger, with very few of their running series being carried over into production by Marvel.

Adventure Comics was initially Adventure Publications, an independent publisher that formed in 1986. In October of 1989, Malibu purchased Adventure, changed its name, and turned it into a label to publish licensed properties.

Several of the characters from Adventure's original series were later brought into the Genesis Universe.

Aircel would find success in 1990 with their The Men in Black series, which would eventually go on to find international acclaim with a media franchise including video games, an animated television series, and three blockbuster films. The Men in Black was one of the few non-Ultraverse series from Malibu to find continued production after the Marvel buy-out, with four one-shot issues published in 1997 to promote the release of the first film adaptation.

Bravura Comics was launched by Malibu in Fall 1993 as an imprint for creator-owned comics. The imprint continued publishing issues into October 1995, well after Malibu was bought out by Marvel, thought a number of series were also left unfinished after they were cancelled in the buy-out.

Formed in 1986, Eternity Comics only published a small number of issues before its financier, Scott Mitchell Rosenberg, turned the publisher into an imprint of Malibu in April 1987. While with Malibu, Eternity published a wide-array of series, including creator-owned properties, licensed properties, and translated reprints of foreign series for the American market.

There were no actively-published series on the Eternity imprint at the time Malibu was bought out by Marvel. Several of the series published by Eternity were later brought into the Genesis Universe.

Marvel Comics would later try its own hand at music-themed comics with the Marvel Music imprint.

Malibu Comics in Other Media

A number of Malibu properties found success outside of comics after the buy-out, with several producing films, television series and video games.

By far the most successful of Malibu's properties, The Men in Black from the Aircel Comics imprint spawned a word-wide media franchise, with a $1.65 billion film series, as well as an animated television series, and several video games.

Several characters from Malibu's popular Ultraverse saw adaptations into films and television series, though none of them met with very much success, either critically or financially.

Firearm was a 35-minute short-film released on VHS in 1993 as a bundle with Firearm #0. It serves as an origin for the character, and Firearm #0 takes place immediately where the film leaves off.

Released in syndication, and running for 44 episodes, Night Man featured a loose adaptation of the Night Man character from the main Malibu line.

UltraForce was a 13-episode animated television series that ran on the USA Network from September to December 1995. The series was loosely based on the story-line of UltraForce Vol 1, prior to the Black September event.