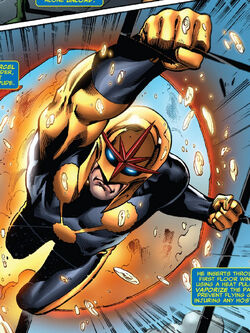 Malik Tarcel was a Shi'ar was recruited into the Nova Corps. He replaced Richard Rider as Nova Prime.

The Nova Corps were devastated by the Annihilation Wave, the Xandarian Worldmind secretly sought out new recruits during Richard Rider's sleep hours. Malik Tarcel was one of the recruits as a Nova Centurion. Soon after his selection, the Worldmind transmitted an emergency signal as the result of nearly being destroyed by Galactus. The rest of the team consisted of Irani Rael, Qubit, Morrow and Fraktur they worked together to trace Worldmind's signal.[citation needed]

The Centurions traveled to Earth following the Skrulls that attempted an Invasion of the planet. They worked with Richard Rider in helping keep the peace after the invasion. They then had to deal with a hostage situation with the Serpent Society, Tarcel took down brought down Black Mamba and then the team tracked down the Dragon Man.[citation needed]

Worldmind selected Malik Tarcel as the new Nova Prime after Richard Rider was expelled from the Nova Corps under accusations of mental instability. As the new Nova Prima he was dispatched to deal with the war between the Shi'ar and the Kree Empires.[citation needed]

Malik Tarcel worked against the Shi'ar due to their part in starting war. He was loyal to the rule of Lilandra and saw Emperor Vulcan as usurper to the throne and anyone who followed him was an enemy. As Nova Prime he led an attack on the Shi'ar armada who were trying to attack a Kree world. The attack was successful but this battle led to the Imperial Guard entering the war.[citation needed]

Malik Tarcel took on the Gladiator directly in combat but he was defeated and had no choice but to surrender to save his troops. The Centurions who were captured were executed by Xenith. While captivity, Emperor Vulcan tortured him just for the pleasure of seeing him in pain. Malik Tarcel was later rescued by Garthan Saal and hasn't been seen since.[citation needed]

Due to his promotion to the rank of Nova Prime Malik Tarcel was given a greater portion of the Nova Force than the rest of the corp, a vast energy source that he can apply to grant himself a number of superhuman attributes. Though his level of power was significantly less than Richard Rider, it is slightly greater than that of the rank of Centurion Prime.


Superhuman Speed: By channeling the Nova Force properly, Malik Tarcel can grant himself the ability to run and move at speeds that are beyond the physical limits of the finest Shi'ar athlete. While the upper limit of his running speed isn't known, he can at least run sub-sonic speeds.

Superhuman Stamina: Due to the Nova Forces augmentation of his musculature, Malik Tarcel's muscles produce considerably less fatigue toxins during physical activity than the musculature of a normal human. While the full limits of his stamina aren't known, he is able to exert himself physically for at least 24 hours before the fatigue toxins impair him.


Superhuman Durability: Malik Tarcel's body is highly resistant to all forms of conventional physical injury and is practically invulnerable. He can withstand high caliber bullets, falls from tremendous heights, exposure to extremes in both temperature and pressure, powerful energy blasts, acidic corrosives, and tremendous impact forces without sustaining injury.

Superhuman Agility: Malik Tarcel's agility, balance, and bodily coordination are enhanced to levels that are beyond the physical limits of the finest Shi'ar athlete.


Superhuman Reflexes: Malik Tarcel's reflexes are similarly enhanced and are superior to those of the finest Shi'ar athlete.


Flight: Malik Tarcel can use the Nova Force to propel himself through the air at tremendous speeds. Nova is fully capable of achieving faster than light velocities, and often does, while traveling through space. However, moving as such speeds while in the atmosphere of a planet would cause devastation to the planet itself, so he travels much slower while on within a planetary atmosphere, generally at supersonic speeds.


Energy Generation: Malik Tarcel can channel the Nova Force and expel the energy in the form of extremely powerful concussive blasts that he often uses in combat situations.A few of the abilities he has shown are, the ability to manipulate the gravimetric energy of the Nova Force to create hyperspace portals in space such as Space Gates, he can release extremely powerful gravimetric pulses and beams, either from specific parts of his body or from his body surface, he can create powerful electromagnetic discharge that can nullify gravity. He can use the Nova Force to create powerful energy attacks.

Centurion Uniform: Like all Nova Corp officers Malik's suit has a number of functions that aid him in his duties as a Galactic law enforcement officer. The capabilities demonstrated are:

Malik Tarcelis a formidable combatant.He is naturally more comfortable at using the Nova Force's energy generating capabilities during combat. However, he can access the Xandrian Worldmind and instantly gain knowledge of Xandrian hand-to-hand combat techniques which he sometimes uses in combination with his energy powers.

While his strength limit is unknown, he has shown enough strength to easily lift well in excess of 100 tons without effort. He is one of the physically strongest beings in the Universe. Whenever on Earth, Malik Tarcel is easily one of the strongest and most powerful beings on the planet.

Malik Tarcel uses the Xandrian Worldmind to help maintain his mood and mental stability. Without it, utilizing the full power of the Nova Force would overcome Malik Tarcel's mental stability, causing a severe mental breakdown and possibly insanity.

The helmet contained radio circuitry enabling Nova to pick up radio transmissions, monitor transmissions, telescopic sights, night vision sensors, and heat imaging sensors, as well as overlay a visual heads-up display for tracking energy signatures. The helmet also contains a psynaptic scrambler to use on opponents in close quarters (such as Xenith or Gladiator). Nova's helmet has a rigid construction and shape when worn, but becomes as malleable as cloth when it is not, allowing Malik Tarcel to hide it in his civilian clothes when desired.

Like this? Let us know!
Retrieved from "https://marvel.fandom.com/wiki/Malik_Tarcel_(Earth-616)?oldid=5809378"
Community content is available under CC-BY-SA unless otherwise noted.