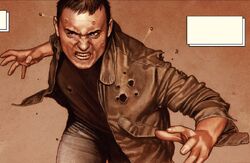 You're going to burst inside that suit when this hits you. They're going to have to pour you out.

Mallen's parents were killed in a shootout with the FBI over weapons violations. He grew up bitter, aligning himself with a small cell of domestic terrorists. They were given the Extremis virus by Dr. Maya Hansen. Mallen took it and emerged as a superhuman threat after the incubation period.[1]

Mallen attacked the Houston FBI branch. Soon after he was confronted by Iron Man. He badly injured Stark and then set out to kill the US leaders in Washington DC.[2] He briefly stopped to talk with a protester, and ended up murdering her over her views.[3]

Mallen was intercepted outside by Iron Man, he himself having taken Extremis. Mallen was defeated but refused to give up, forcing Iron Man to kill him, blowing up his head with his repulsors. Even after which his then-headless body began to get up, falling down shortly afterwards.[4]

Mallen's powers were the result of the Extremis virus, a "robotic microsurgery" experimental drug created at the Futurepharm Corporation, which gave him the following abilities:

Superhuman strength due to being enhanced by Extremis

Like this? Let us know!
Retrieved from "https://marvel.fandom.com/wiki/Mallen_(Earth-616)?oldid=5867807"
Community content is available under CC-BY-SA unless otherwise noted.