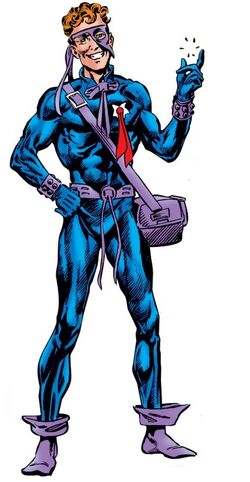 Manslaughter claimed he grew up in poverty and on the streets, although he could have been lying. His real origin is unknown. It is known that Manslaughter used his then-latent powers to track the Interloper in the deserts of Siberia. Impressed by the feat, the Interloper taught Manslaughter to develop his psychic abilities. However, he noticed that the Manslaughter was mentally unstable, so he did not teach him too much in order to prevent the creation of a threat. Manslaughter had learned enough and began a career as a paid killer, motivated more because of the sport and fun than for reward. The Interloper tried to stop him, but found himself unable to.

Manslaughter eventually returned along with Valkyrie, Andromeda and Interloper as a member of the Dragon's Circle. He adopted the body of Roger Loomis as his host.[5]

He has since resumed his former career as a mercenary.[6]

An expert when placing and preparing traps. He is also a great fighter with sharp weapons, thrown weapons, guns and hand-to-hand, unarmed combat.

Manslaughter possesses the normal human strength of a man of his age, height, and build who engages in moderate regular exercise.

Manslaughter was confirmed to be a mutant in Defenders: Strange Heroes #1 in the Manslaughter entry.

Like this? Let us know!
Retrieved from "https://marvel.fandom.com/wiki/Manslaughter_(Earth-616)?oldid=6119070"
Community content is available under CC-BY-SA unless otherwise noted.