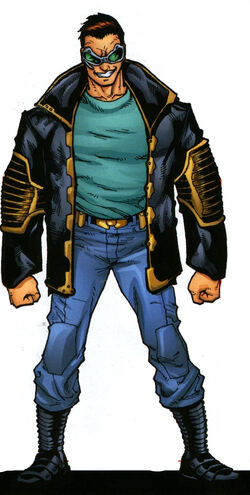 Vicente later grew to become a high-ranking officer of Los Cuarenta Ladrones (the LCL), meaning "the Forty Thieves," a dismissive colloquialism for El Ministerio de Asuntos Internacionales Armó Servicio de Vulcan Domuyo-- the Vulcan Domuyan Secret Police. Moreover, due to his dual citizenship, Vicente (who used the alias Danny Vincent) became an agent for U.S. intelligence, writing books for the National Security Agency. Danny regularly did black bag operations for the LCL and the Americans with the code-name Junta.[1]

Danny accepted money from a CIA front, by way of a Russian mobster, to fund an operation to destabilize the African nation of Ghudaza. Supposedly, this would be nearly impossible to trace back to the American intelligence community, who hoped to ultimately de-stabilize Ghudaza's neighboring nation, Wakanda. Unfortunately, Danny's operation caused Ghudaza to degenerate into civil war and resultant ethnic genocide, sending a flood of refugees into Wakanda.

Later, the LCL, the Russian mob, and the rogue CIA agents Danny worked with earlier formed a shadowy transcontinental cooperative called Xcon. XCON began replacing highly-placed political figures with clone-like duplicates. XCON also began killing key intelligence operatives, causing Danny to flee his former employers of the LCL. As insurance for his own safety, Danny took with him the President of the United States, as XCON had replaced him with a duplicate some weeks before. Danny sought help from operatives of the Black Panther, ultimately teaming with the Panther's ally, Queen Divine Justice. Danny and Queen finally returned the President safely to the White House at the same time the Black Panther and his ally Iron Man managed to topple XCON.[2]

Unfortunately, Danny was left a pariah, as neither the LCL, his U.S. contacts, nor any espionage agency would talk to him. Danny found his way to his birthplace in Queens, New York, turning to freelance mercenary work. He moved into Little Mogadishu and supposedly intended to take over his late father's failing dry cleaning business. He was interviewing for store employees when word of the derailment of the "Money Train" came over the news.

Danny knew that Grace & Tumbalt, the gang-owned corporation that developed Princeton Walk (and consequently created Little Mogadishu) laundered money for the CIA. Danny reasoned Grace & Tumbalt's connections were his way back into the spy game. He ingratiated himself with Grace & Tumbalt operative Nigel "Triage" Blacque, who sent Danny out to investigate the Money Train derailment as a test of his abilities.

Danny made it to The Money Train, only to find Kasper Cole (The White Tiger) pinned down by crossfire. He rescued Tiger as a matter of convenience— more to get him out of the way. He explained his gravity powers by telling Kasper he was the son of a super-villain. Kasper knew from Black Panther’s files that Danny was actually the super-spy Junta, but played along so as to keep an eye on Junta.

In fact, the subway was derailed by Jim Rhodes (War Machine), who had declared war on the 66 Bridge Gang, as they were also responsible for the death of his sister. Rhodes got the drop on Junta and Kasper Cole leaving them handcuffed together by the wreck, but he later relents and winds up helping them escape.

Rhodes had actually placed a chemical tracer on the Money Train so as to trace the agents of the 66 Bridges Gang to the top echelons. Rhodes pulls together Danny as well as Kasper Cole and Josiah X into an erstwhile team as each of them had reasons of their own to see the end of the 66 Bridges Gang. Junta, for his part, now sees an opportunity to hand Triage over to his superiors in the 66 Bridges of Chicago, earning back his underworld cred. The team managed to bring down scores of crooked cops, politicians and justice officials, as well as Triage. After a climactic battle, Danny personally turned Triage over to the authorities, despite the fact that this action would sever all his former underworld connections.[3]

After the Civil War, he was listed as a potential recruit for the Initiative,[4] and was briefly recruited into the Defenders Initiative team.[5] Some months later, he appeared with a band of South American heroes during the rise of the Mayan Gods.[6]

Like this? Let us know!
Retrieved from "https://marvel.fandom.com/wiki/Manuel_Vicente_(Earth-616)?oldid=6105545"
Community content is available under CC-BY-SA unless otherwise noted.